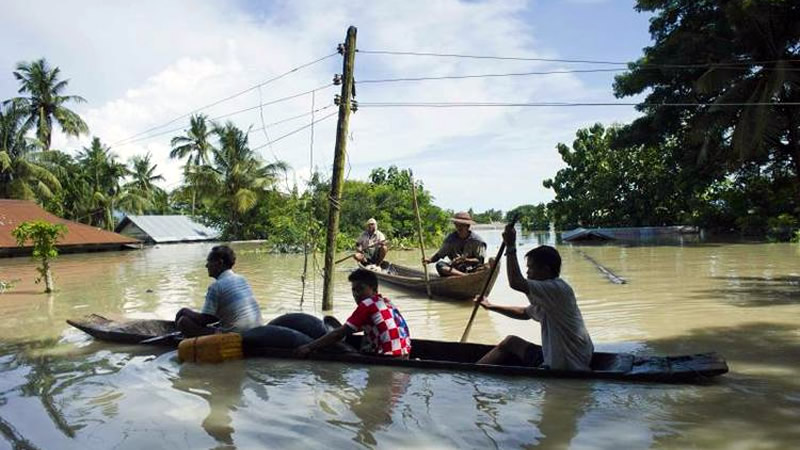 Rescue workers in Myanmar raced on Monday to help tens of thousands of people in remote areas enduring roof-top high floods, as the death toll climbed to at least 46.

Hundreds have also perished in recent days in India, Nepal, Pakistan and Vietnam following floods and landslides triggered by heavy seasonal rains. In Myanmar, “46 people have died and more than 200,000 have been affected by the floods across the country”, an official at the Relief and Resettlement Department told AFP. “We are speeding up assistance and relief work,” said the official, who asked not to be named. Myanmar is a vast and poor country, where communications and infrastructure are already weak; prompting the United Nations to warn that a full picture of the scale of the disaster may not emerge for days. Authorities have declared the four worst-hit areas in central and western Myanmar “national disaster-affected regions”. In the impoverished northern Sagaing Region, residents said the flood waters caught them off guard as they swept into villages, swamping homes and fields.

“There was no warning… we thought it was normal (seasonal flooding),” Aye Myat Su, 30, told AFP from a monastery being used as a temporary shelter in the regional capital of Kalay. “But within a few hours, the whole house was underwater. My husband had to get onto the roof as there was no way out.” Landslides in Chin State — south of Sagaing — have destroyed 700 homes in the state capital Haka, while more than 5,000 people in another district are in relief camps, the state-backed Global New Light of Myanmar reported on Monday. President Thein Sein has promised the government will do its “utmost” to provide relief, but said parts of Chin had been “cut off from surrounding areas”, the report added. Myanmar’s Health Ministry says it is distributing medical supplies across the country including chlorine tablets, although it was unclear how it will reach many of the afflicted zones, with boats and helicopters in short supply.

Rains have also battered Rakhine State, which hosts about 140,000 displaced people, mainly Rohingya Muslims, who live in exposed makeshift coastal camps following deadly 2012 unrest between the minority group and Buddhists. Elsewhere in the region, flooding had claimed the lives of more than 100 people in India, officials there said late on Sunday. Another 109 have died in Pakistan over the past two weeks, according to authorities there. Meanwhile in Vietnam rescuers were battling toxic mudslides from flood-hit coal mines in the northern province of Quang Ninh, home to the UNESCO-listed Halong Bay tourist site. Seventeen people have been killed in recent flooding in Vietnam, including two families swallowed up by the toxic mud. -AFP