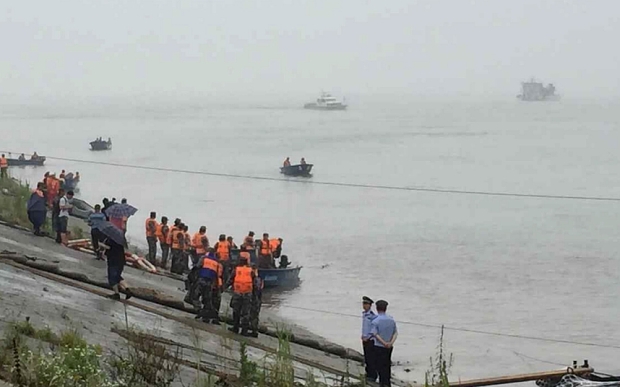 A passenger ship carrying more than 450 people has sunk in the Yangtze river in central China, state media reported Tuesday.

The ship named Dongfangzhixing, or “Eastern Star”, was headed from the eastern city of Nanjing to the southwestern city of Chongqing when it sank in the Jianli section of the river, in Hubei province, on Monday evening, Xinhua said.

The cause of the sinking was not immediately clear, but state broadcaster CCTV said it was an accident. Eight people have been rescued, including the captain and chief engineer, who both said the vessel had been caught in a “cyclone”. There were 458 people on board when the vessel sank at 9:28 pm (1328 GMT), CCTV said, including 406 Chinese passengers, five travel agency workers and 47 crew members. According to CCTV, the vessel — which measures 76.5 metres long (250 feet) in length) — is capable of carrying up to 534 people, and was owned by a firm that operated tours in the region of the Three Gorges dam.

Xinhua said rescue work was difficult due to bad weather, strong winds and heavy rain. CCTV said Chinese premier Li Keqiang was on his way to the site. A total of 22 people, including eight foreigners, were killed when a tugboat sank on the river between the eastern cities of Jingjiang and Zhangjiagang in January. After the January accident, the provincial government said the boat was undergoing trials without properly completing the required procedures and without first reporting the condition of the ship, as required by regulations. –AFP