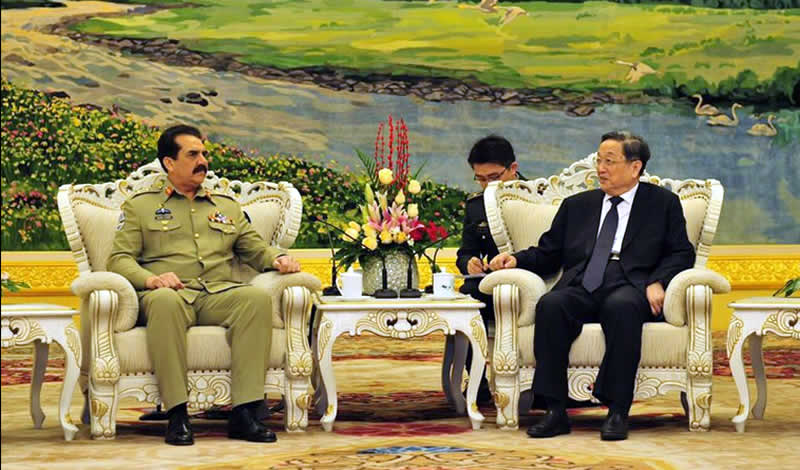 Chinese State Leader Yu Zhengsheng termed Pakistan as the “most reliable friend” and said just as Pakistan has always stood by China, Chinese government and its people will stand with Pakistan and help it in all respects.

#Chinese FM to #COAS in mtng:#Pak is China’s irreplaceable all weather friend,both countries part of community of shared destiny

General Raheel thanked the Chinese leadership for its support to Pakistan and said, “The world must understand the evolving environment … greater international focus, coordination [is required] to logically conclude the fight [against] terrorism.”

COAS Raheel Sharif had met his counterpart Gen Qi Jianguo at the headquarters of the People’s Liberation Army (PLA) on Sunday. Gen Sharif held extensive talks with General Qi during which views were exchanged on full range of regional security and defence-related issues. They agreed to enhance long-term defence collaboration and strengthen security and counter-terrorism cooperation and intelligence sharing and training exchanges.

The army chief had also called on Vice Chairman of the Central Military Commission, Gen Fan Changlong on Sunday. According to ISPR, Gen Fan described Pakistan and China as strategic cooperation partners and “iron brothers”. Expressing solidarity with the people and the armed forces of Pakistan, Gen Fan had praised the success of Operation Zarb-i-Azb which he termed “decisive, bold and a hard blow for terrorists”.