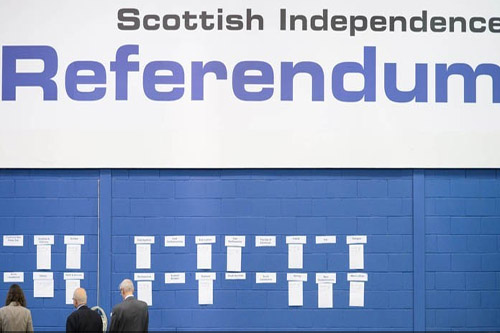 Those who favour staying with the UK are ahead in the vote count in Scotland’s independence referendum, opening up a steady lead over the Yes campaingers.

Clackmannanshire was the first region to declare results with the No campaign securing 54 percent against 46 percent for the Yes side. Comhairle nan Eilean Siar, Orkney and Shetland also favoured the No campaign. Dundee City and and Dunbartonshire voted Yes.

Laurence Lee, reporting from Edinburgh, said the early results matched almost exactly the exit poll figure. “We can see where the wind is blowing.  There are more polls coming but the early indication shows it’s a ‘No’ night” Thursday’s epic independence referendum will determine whether Scotland would end its 307-year-old union with England and become an independent nation or stay within the United Kingdom – a decision which could have consequences outside Britain. Before voting ended at 21:00 GMT on Thursday, polling stations across the country reported a high voter turnout – some as high as 90 percent. Most opinion polls and experts said ahead of the referendum that it was a vote too tight to predict.

Electoral officials said the result was expected by breakfast time on Friday morning.  The campaign has fired up many Scots who have previously taken little interest in politics. About 97 percent of eligible Scots had registered to vote. “This is the first time I’ve felt that my vote can actually make a major difference, not just a bit of political shifting but actual substantial change,” one female voter told Al Jazeera.

The question for voters was “Should Scotland be an independent country?” and they were asked to mark either “Yes” or “No”. On the eve of the referendum, the battle for Scotland had all the trappings of a normal election campaign: “Yes Scotland” and  “No, Thanks” posters in windows, buttons on jackets, leaflets on street corners and megaphone-topped campaign cars cruising the streets blasting out Scottish songs and “Children of the Revolution.”

The independence movement says Scots should be able to choose their own leaders and make their own decisions rather than be ruled from London. Many of those voting for independence felt that being governed from the Westminster parliament had opened too wide a gap between rich and poor. The prospect of breaking up the United Kingdom, the world’s sixth-largest economy and a permanent member of the United Nations Security Council, has prompted citizens and allies alike to question what would be left. British politicians, banks and businessmen have closed ranks to warn of economic hardship, job losses and investment flight should Scots decide to go it alone.

Defence would also be a big question – Britain’s submarine-borne nuclear arsenal, part of NATO’s defences – is based in Scotland’s Firth of Clyde. European leaders have warned that an independent Scotland would have to get to the back of the queue to join the European Union.

Spain has been especially vocal, fearing it would further inspire separatists in Catalonia and the Basque Country, More than 4.2 million people are registered to vote in the country of 5.3 million people. including, for the first time, 16 and 17-year-olds – with neither side assured of a victory. -aljazeera