China to Invest $20 Billion in India 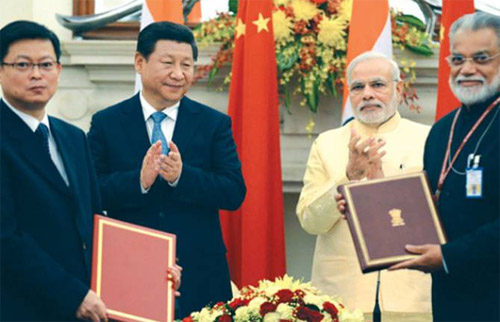 China to invest $20 billion in India

China is not a warlike nation, President Xi Jinping said on Thursday, during a rare trip to neighbour India that was dominated by a standoff on a barren Himalayan plateau between soldiers from the world’s two most populous nations.

Robust comments from India’s new Prime Minister Narendra Modi about the dispute in territory claimed by both Asian giants overshadowed Xi’s pledge of $30 billion investments in South Asia over five years, including $20 billion in India.

“A warlike state, however big it may be, will eventually perish,” Xi said in a speech, adding that China believed its neighbours were key to its wellbeing. He said China was committed to the path of peaceful development, addressing concerns in Asia about Beijing’s increasingly assertive territorial claims including in the South China Sea, a vital global trade route. But the mood was stern when Modi and Xi emerged from a long meeting to address reporters soon after officials confirmed that soldiers had pulled back from their positions in a western Himalayan region claimed by India and China. “I raised our serious concern over repeated incidents along the border,” said Modi, with Xi sitting to his right.

“There should be peace in our relations and in the borders. If this happens, we can realise (the) true potential of our relations,” added Modi, a nationalist elected in May partly on promises to build a more assertive India. Dozens of soldiers from both sides had faced off on the Ladakh plateau for over a week in a dispute about infrastructure works near the de facto border, where the two countries fought a brief war in 1962. Raising hopes for a new push to resolve their territorial differences, Modi called for an early border settlement with China. The two sides have held 17 rounds of border talks since the early 1990s without making significant progress. Modi has yet to appoint a special envoy to restart the talks. “We have to address the boundary question very soon,” Modi said, urging “clarification” of the Line of Actual Control – the frontline where fighting ended. In his comments, Xi played down the tensions and agreed with Modi that they should work to settle the border question, using language China has used in the past.

“Sometimes there might be certain incidents, but the two sides are fully capable of acting promptly to effectively manage the situation,” he said. Srikanth Kondapalli, a China watcher with Delhi’s Jawaharlal Nehru University, said Modi’s tough words were aimed at a domestic audience ahead of regional elections, including in Ladakh, a remote corner of Indian-held Kashmir. “As a nationalist, he stood his ground, but the fact of the matter is that he cannot control the other side,” he said, saying fast progress on a permanent border fix was unlikely. “Both sides have given a diplomatic but stiff response, both sides have said (the border) should be resolved early but there is no deadline.”

Despite the tension, the two sides were able to agree on investments aimed at significantly upgrading their commercial relationship, with China pledging $20 billion over the next five years for industrial parks and infrastructure including railway technology. That contrasts with just $400 million in Chinese investment in India over the last 14 years. The leaders agreed to begin talks on cooperating in the nuclear power industry. Xi said China would support India becoming a full member of the Shanghai Cooperation Organisation, a regional security body that includes China and Russia. He also backed its aspiration to play a greater role at the United Nations, including on the Security Council. Modi is keen on Chinese investment to help balance $65 billion in annual trade that is heavily tilted in China’s favour. Xi promised more access for India’s pharmaceutical, farming and fuel products to China. Xi also set a target to raise annual bilateral trade with South Asia to $150 billion in the next five years.

He arrived in India on Wednesday, visiting Modi’s home state of Gujarat for a riverside dinner that also marked the prime minister’s 64th birthday. Kondapalli said the chemistry between the two men was good and set the stage for a more personalised relationship over the next few years. “For the sake of stability, for the sake of economic relations … this bodes well,” he said. One irritant for China is the presence in India of exiled Tibetan spiritual leader the Dalai Lama, who has lived in the country since fleeing a failed uprising against Chinese rule of his homeland in 1959. A government of exiled Tibetans and tens of thousands of refugees are also based in northern India.

About 20 supporters of a free Tibet, mainly women, protested within a few metres of the building in New Delhi where Modi and Xi met, waving Tibetan flags and shouting: “We want justice.” Police detained them after a few minutes. Several other small pro-Tibet protests broke out across the city. Modi reiterated India’s position that it will not allow “anti-China” activities from Tibetans in the country. Speaking in India’s financial centre, Mumbai, the Dalai Lama said Xi should use his visit to learn from the Indian experience of democratic rule, and learn democratic practices. He also linked the border flareups to Tibet, which stretches the length of the Chinese side of the border with India. -nation

No Dialogue Till Release of PTI Workers: Imran Khan