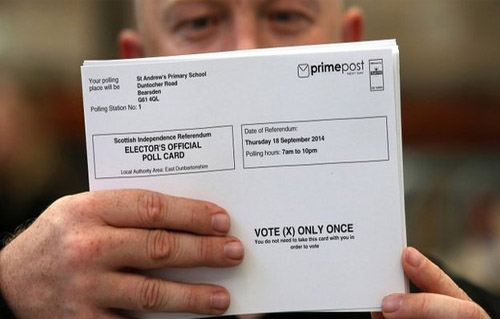 People in Scotland will vote later on whether the country should stay in the UK or become an independent nation. Voters will answer “Yes” or “No” to the referendum question: “Should Scotland be an independent country?” With 4,285,323 people – 97% of the electorate – registered to vote, a historically high turnout is expected.

Votes will be cast at 2,608 polling places across the country between 07:00 and 22:00 on Thursday. The result is expected early on Friday morning. Votes will be counted in each of Scotland’s 32 local authority areas.

These will include votes cast from the 789,024 postal vote applications, which was the largest volume of registration for postal votes ever in Scotland. After votes have been tallied, the counting officer in each area will communicate the result to the chief counting officer Mary Pitcaithly in Edinburgh. With her approval they will then make a declaration of the result.

Once the results from all 32 local authority areas are known, Ms Pitcaithly will declare the result of the referendum at the Royal Highland Centre outside Edinburgh. Ms Pitcaithly has said she will announce the result at “breakfast time” on Friday. The result is most likely to be between 06:30 and 07:30, according to Elections Scotland.

The bulk of these are expected to come in between 03:00 and 06:00. Because of the expected high turnout, counting officers have put measures in place to reduce the risk of queuing at polling stations.

The remote nature of some Scottish regions also means bad weather could delay the receipt of ballot boxes at counting centres, in turn delaying the national result. Helicopters and boats are being used to transport ballot boxes to counts in areas such as Argyll and Bute. Elections Scotland said recounts will only be allowed at a local level on the basis of concerns about process, not the closeness of a result. -bbc