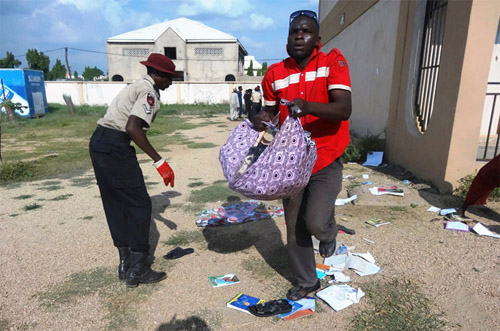 Suspected Boko Haram fighters have stormed a teacher training college in the north of the country, killing at least 15 people in a shoot-out and explosions. Two suicide bombers detonated their explosives in a lecture hall packed with students around 2:00pm on Wednesday. Another group of attackers threw explosives at students and opened fire on those who attempted to escape Kano’s Federal College of Education.

“Shreds of human flesh and gory splash of blood dot the surroundings. The grotesque remains of the suicide bomber still haunt me,” said Ibrahim Mohammed, a lecturer who locked himself up in his office to escape the attack.  Though no group claimed immediate responsibility, the carnage bore the hallmarks of previous attacks carried out by the Boko Haram, an armed group that aims to carve out a caliphate in Nigeria’s north and weed out elements of Western influence.  “The gunmen first killed a security guard at the gates of the college’s new extension and they rushed in shooting everyone on sight,” said Ibrahim Yakubu, a survivor.

Speaking to reporters at the scene, Police Commissioner Adenerele Shinaba said the attackers had been approached by police who were suspicious of their movements, “only for them to open fire around the school, resulting in them gaining entry to the premises and starting to throw bombs”. Security officials blamed Boko Haram for the attack and said at least 34 people were injured. Witnesses said the attackers used the chaos after the blast to kill terrified people looking for an escape.  A lecturer who declined to be named said some of the gunmen went around the offices at the college’s School of Arts and Social Sciences shooting anyone in sight. “As I speak to you, we are still trying to locate a colleague who I saw rushing towards his office as I latched my door,” he said.  [contentblock id=2 img=adsense.png]

A female teacher said she narrowly escaped the blast, which occurred as she was heading towards the spot where it hit. “It was a miracle,” she said. “I called a friend and told her I would meet her on my way out. On my way to the car I stopped to talk to some colleagues. Then suddenly there were gun shots and a loud bang,” she recalled. “I ran, I crawled and walked for a long distance to get out of the school building. No one knew where [the attackers] were and how many were they. It was hell. Everyone was running.” Boko Haram in the local language of Hausa means “Western education is forbidden”. In one of his many video appearances, the group’s self-declared leader, Abubakar Shekau, angrily thundered; “I hate university,” in reference to Western-styled schools. In April, Boko Haram fighters attacked a girls’ boarding school in the remote northeast village of Chibok, abducting more than 200 students.

At least 219 of the girls are still in the hands of the group. Wednesday’s attack was the fourth on major educational institutions in Kano, the most important northern city. In April 2012, Boko Haram gunmen attacked a church service at the city’s Bayero University, killing more than 20 students and professors in attendance.

In June of that year, a car bomb was detonated in the city’s School of Hygiene as students were registering for the college.  Nigeria is entangled in an intractable fight to contain the Boko Haram insurgency that has claimed more than 2,000 lives this year alone, according to Human Rights Watch. The group has recently stepped up attacks on towns and villages in the northeast, along the border with Cameroon, in an attempt to establish an Islamic state. -aljazeera

US Lawmakers Back Plan To Arm Syrian Rebels

US Lawmakers Back Plan To Arm Syrian Rebels