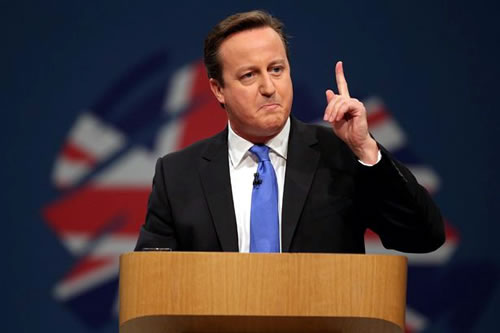 If you don’t like me, I won’t be here forever, the British Prime Minister David Cameron tells voters during an impassioned final plea in Aberdeen.

David Cameron begged the people of Scotland not to leave the United Kingdom as he promised them that he “won’t be here forever”. In a final plea before Thursday’s referendum, the Prime Minister warned Scottish voters in a speech in Aberdeen that separation would be a “painful divorce”.

Mr Cameron was close to tears as he warned voters that Alex Salmond’s separatist movement had “painted a picture” of an independent Scotland that was “too good to be true”. He said the reality would involve stricter borders which could mean people being forced to “pack their passport when they’re going to see friends and loved ones”.

Mr Cameron also attempted to placate Scots who dislike him and his government by reminding them that he would not be Prime Minister forever. “Don’t think, ‘I’m frustrated with politics right now, so I’ll walk out the door and never come back,’ ” Mr Cameron told the audience of Conservative activists. “If you don’t like me, I won’t be here forever. If you don’t like this government, it won’t last forever. But if you leave the UK, – that will be forever.”

The White House on Monday reiterated Barack Obama’s call for Scotland to remain part of a united Britain. The President’s spokesman said Mr Obama wanted the UK to remain “strong, robust, united, and an effective partner”. In London, thousands of people attended a “unity rally” intended to encourage Scots to vote against independence. 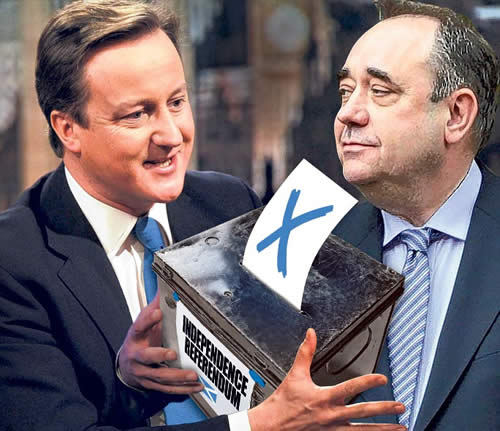 Mr Cameron has in recent weeks faced accusations that he has failed to make an “emotional case for the UK”. However, in a last-ditch attempt to impress on Scots the consequences of a Yes vote, he said: “For the people of Scotland to walk away now would be like painstakingly building a home and then walking out the door and throwing away the keys.”

He said that “head and heart and soul, we want you to stay”, paying tribute to “British values” and saying that our nations had “only become Great Britain because of the greatness of Scotland”. The Prime Minister also hit back at claims made by the First Minister that he has conducted a “scare-mongering” campaign by calling on business leaders to speak out against independence.

“To warn of the consequences is not to scare-monger, it is like warning a friend about a decision they might take that will affect the rest of their lives, and the lives of their children,” Mr Cameron said. “I say all this because I don’t want the people of Scotland to be sold a dream that disappears.”

He urged voters across the country not to “lose faith” in what the UK can achieve if it stays together, adding: “So as you reach your final decision, please, please don’t let anyone tell you that you can’t be a proud Scot and a proud Brit. “Please don’t lose faith in what this country is and what we can be. Don’t forget what a great United Kingdom you are part of. Don’t turn your backs on what is the best family of nations in the world and the best hope for your family in this world.”

Mr Cameron also said that he “understood” why millions of Scots were planning to vote Yes but urged them to consider the “consequences” of separation. He said that if the people of Scotland voted No, they would see “concrete change” through greater powers being devolved to Holyrood. “For me it’s simple. You don’t get the change you want by ripping your country apart. You don’t get change by undermining your economy and damaging your businesses and diminishing your place in the world.”

Mr Cameron warned that a Yes vote would put Scottish pensions at risk and threaten the economic recovery. Challenging Mr Salmond’s claim of a “positive vision”, he said independence was in fact about “dividing people” and “closing doors on friends and family”. Anders Fogh Rasmussen, Nato’s secretary general, said that Scotland would require the backing of all 28 members of the alliance if it wanted to join. 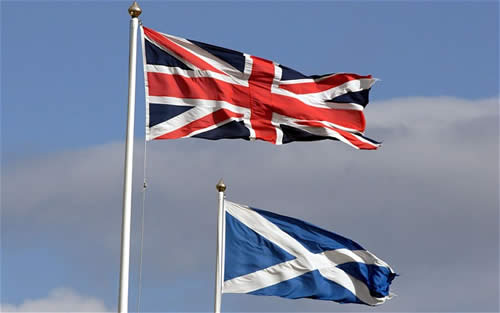 Mr Salmond has said that Scotland would join Nato but would also demand that Westminster remove the Trident nuclear deterrent from its Clyde base. Meanwhile, Gordon Brown said a No vote would lead to three constitutional guarantees that would “lock-in change” and create a stronger Scottish Parliament.

He claimed voters wanted change that could unite the country, and outlined a programme of new powers that would “bring the people of Scotland together”. The former prime minister added: “They want to know that a ‘No’ vote does not mean no change and instead seek guarantees of change locked in, and clear assurances that from Sept 19 the pace of change will not stall but speed up.”

Mr Brown said people were saying, “Give us the guarantees of change, and with these guarantees we can vote for a strong Scottish Parliament within the UK.” On a campaign stop on Tuesday, Ed Miliband is also expected to promise constitutional change in the event of a No vote. “We will change the British state too, the House of Lords and the way we work together across our nations,” he will say.

Blair Jenkins, chief executive of the Yes Scotland campaign, said: “David Cameron’s speech was the same litany of empty threats and empty promises we have come to expect from the No campaign.” – Telegraph

Top 10 Tips to Look After Your Mental Health

Top 10 Tips to Look After Your Mental Health