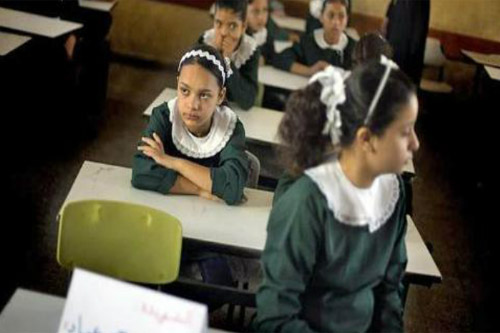 Gaza children back to school after 50-day war

At least half a million children returned to their schools in the Gaza strip on Sunday, where many will be given special attention and pyschological counselling before their regular classes begin. This initiative aims to help children deal with the traumas the war has inflicted on them.

There has been several weeks of delay due to the damage of more than 250 schools and the use of about 90 UN educational facilities as shelters for tens of thousands of internally displaced Palestinians, the United Nations and local authorities said. “The top priority now is making sure that after a period of psychosocial support, including the use of theatre for  development techniques, our students can return to their regular curricula,” said Pierre Krähenbühl, head of the United Nations Relief and Works Agency, which runs more than 200 Gaza schools. He also said that UNRWA has employed over 200 counsellors who will work with as much as 240,000 students in its schools.[contentblock id=2 img=adsense.png]

UNRWA said some 64,000 refugees are still being housed in 20 Gaza schools. Gaza’s deputy education minister, Zeyad Thabet, also said a total of 26 schools in the territory have been destroyed while 232 schools have been damaged during the war. In Shejaia, a Gaza neighbourhood where hundreds of houses were damaged or destroyed, schools have lost some of their students, staff and their facilities have been affected by the war. The Palestinian Education Ministry along with international and national agencies will also take part in providing psychosocial support to another quarter million students in Gaza’s public schools.

Health officials commissioned by Hamas claimed that more than 2,100 people, mostly civilians and among them 500 children have been killed in the war. The Human Rights Watch released a report on Thursday accusing Israel of committing war crimes by attacking three UNRWA run schools, killing 45 Palestinians, including 17 children, in or near those facilities. [contentblock id=3 img=adsense.png]The Israeli government and military spokesmen declined comment. Moreoever, Israeli school children commenced their school year on time but a spent a summer vacation under rocket attack from Gaza thus will have Psychological help available too. -aljazeera