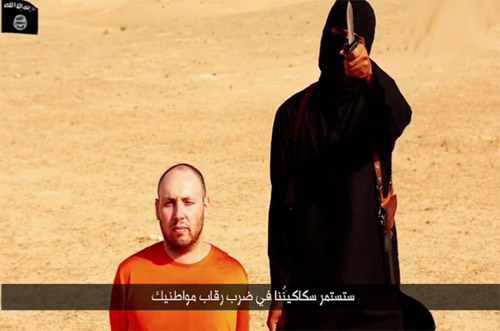 An Islamic militant group released a video on Tuesday showing the second beheading of an American hostage in two weeks and blamed President Obama for the killing. The video raised the pressure on the president to order military strikes on the group in its sanctuary in Syria.

The hostage, Steven J. Sotloff, is shown in the video kneeling like the previous victim, James Foley, while a masked figure stands above, wielding a knife. Mr. Sotloff addresses the camera and describes himself as “paying the price” for Mr. Obama’s decision to strike the group, the Islamic State in Iraq and Syria, in northern Iraq. The apparent murder of Mr. Sotloff, 31, came despite televised pleas from his mother to the leader of ISIS seeking mercy for her son, a freelance journalist who was captured in northern Syria a year ago. Although the administration said it had not yet authenticated the video, members of Mr. Sotloff’s family issued a statement saying they believed he had been killed.

The videotaped beheadings and threats by ISIS, which have followed its lightning conquest of broad areas of Syria and Iraq, have transformed the group into one of the most urgent threats facing a president who is also wrestling with crises from Ukraine to Gaza. The killing raises difficult questions for Mr. Obama, who last Friday said he had not yet formulated a strategy for using military force against the militants in Syria. As news of Mr. Sotloff’s death broke on Tuesday afternoon, just before Mr. Obama left for a weeklong trip to Europe and a NATO summit meeting, the White House struggled to deal with the implications for the president’s policy.

“If genuine, we are appalled by the brutal murder of an innocent American journalist, and we express our deepest condolences to his family and friends,” a spokeswoman for the National Security Council, Bernadette Meehan, said of the video. The exact timing of Mr. Sotloff’s killing was not clear. Many American counterterrorism and intelligence officials had assumed that he died earlier — probably killed, they said, at the same time that Mr. Foley was murdered two weeks ago. Yet the video, circulated by the SITE Intelligence Group, a research firm that tracks jihadist online postings,

Showed Mr. Sotloff with a beard and thin hair on his head. In the video of Mr. Foley’s death, Mr. Sotloff appeared almost completely bald and had only stubble on his face. This indicates that the videos were probably made at different times, as does an apparent reference by the masked man to American airstrikes near the Iraqi town of Amerli, which the military carried out last weekend. Mr. Obama did not address the killing before leaving for Estonia, where he plans to reassure Baltic NATO allies in the face of Russia’s incursions into Ukraine. Administration officials said he did not want to speak before intelligence agencies had authenticated the video.

White House officials said that Mr. Obama remained cautious about military strikes in Syria and that he was focused for now on developing a strategy and assembling a broad coalition of countries to deal with ISIS, one of several combatants in Syria’s three-year-old civil war. But the harrowing images of Americans with knives to their throats have given the threat from ISIS an emotional resonance and stoked calls on Capitol Hill and elsewhere for Mr. Obama to act more boldly. Some current and former counterterrorism officials said that although Mr. Obama would be under extraordinary pressure to retaliate, there were arguments against striking back. -nytimes