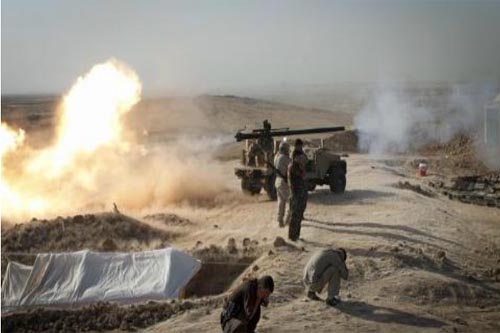 Iraqi officials said they killed, Mussab Mamoud, the town’s Islamic State head, and Mazen Zaki, the military wing commander, along with more than 20 other Sunni rebel fighters. Iraqi security officials said eight of the fighters were Chechen. They also said the fighters include dozens of nationalities, including experienced Chechen snipers. Government forces are still trying to clear the town of explosives left by the armed group which was previously known as ISIL. Iraqi security forces backed by Shia armed volunteers have now begun clearing operations – meant to flush out remaining fighters and detonate bombs laid by the fighters and expected to take several days. The small farming town became an Islamic State stronghold after it was seized last year by Jaish al-Tariqiyah al-Naqshabandiyah – Baath party loyalists led by Saddam Hussein’s former deputy Izzat Ibrahim al-Duri.

Iraqi security forces took it back and occupied the town, only to lose it in the sweep by Islamic State fighters through vast areas of Iraq’s north and west. “The town of Suleiman Bek has been liberated from Islamic State by the Iraqi Army and Peshmerga as well as local volunteers including the Peace Brigade, Badr Corps and Asaib Ahel-al-Haq,” General Abdul Amir al-Zaidi, head of the Dijala Operations commander told Al Jazeera. The Peace Brigade is an offshoot of Shia cleric Muqtada al-Sadr’s former armed group the Mehdi Army, while Asaib Ahel-al-Haq is an Iranian-backed group that has now entered Iraq’s political mainstream. Security sources said fighting was also ongoing to retake the remaining villages still held by Islamic State fighters.

Sulaiman Bek is located near Amerli, where thousands of mainly Shia Turkmen civilians were trapped by the Islamic State siege until Iraqi forces broke through on Sunday. With the latest government advance, half of the main road between the northern city of Kirkuk and Baghdad is now under the control of the Iraqi army, from the southern side of Amerli to the north of Baghdad. The other half linking the road between Tuz Kharmatu to Sulaiman Bek is still contested. The Amerli operation on Sunday was the government’s biggest offensive success since the Islamic State captured a huge chunk of northern and north-central Iraq in June. The southern entry point of the town is now cleared by the Iraqi forces, and other local volunteers and government recruits backed by the Shia armed groups Peace Brigades and Badr Corps. These combined forces are trying on Monday to break into the other northern and western villages surrounding Amerli to push back the Islamic State.

On the west entry point of the town 100km from Tikrit City, which has a number of villages controlled and affiliated to Islamic State, the clashes is also continuing between the Sunni rebel group and the local volunteers from within the town itself backed by Iraqi forces. The breakthrough against the Islamic State was aided by expanded US air strikes, which destroyed Islamc State armed vehicles near Amerli as well as near Mosul Dam further north. On Saturday, the US military attacked Islamic State positions and along with the French and Australians airdropped humanitarian aid to the trapped civilians, mostly Shia Turkmen minority. The US Central Command said the aid drop was accompanied by British fighter jets. In the previous weeks, the US forces have conducted airstrikes in support of Iraqi and Kurdish forces on the ground, fighting against the Islamic State, which controls large areas in Syria and Iraq. -aljazeera