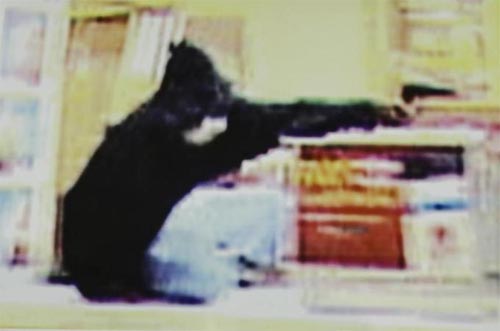 A robbery suspect carrying a plastic-pellet gun and a crew member with the TV show “Cops” were shot dead by police during a response to a restaurant hold-up in Omaha, Nebraska. The TV worker died despite wearing body armour at the incident on Wednesday, while police said the suspect was shot after he fired what officers said looked and sounded like a real handgun.

The suspect, Cortez Washington, 32, was shot as he tried to escape the Wendys restaurant and died outside. The “Cops” crew member, Bryce Dion, a sound technician, was hit while Washington was fleeing, said police chief Todd Scham aderer. Dion, 38, was wearing body armour, but a single bullet hit his arm, “slipped into a gap in the vest”, and entered his chest, Schma derer said.

He said the “Cops” crew – Dion and a camer man – went to the restaurant with two officers who responded to a request for help from another already at the scene. He rejected suggestions that police had over-reacted as “absolutely ridiculous”. Schmaderer said he accepted the invitation from “Cops” to film in Omaha in the name of transparency, and regretted what had happened. “Personally, I will live with this forever.

If I’d have known that this would happen, of course, I wouldn’t have done it.” “Cops” films police on duty and captures intense moments such as arrests, raids and chases. According to its website, the programme has been filmed in at least 140 US cities and three foreign countries. John Langley, the president of the company behind “Cops”, said the crew had been filming all summer in Omaha and had only one week left in the city. -aljazeera