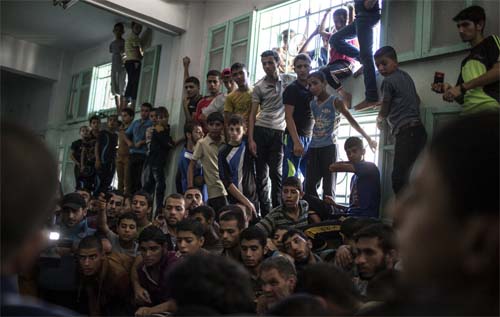 Thousands of Palestinians took to the streets as funerals were held for three Hamas commanders killed in the latest round of Israeli air raids in the Gaza Strip that left a total of 34 Palestinians dead. The Qassam Brigades, Hamas’ military wing, said Mohamed Abo Shamaleh, Raed al-Attar and Mohamed Barhoum were killed in an attack in Rafah on Thursday, little more than a day after an attempt on the life of its leader Mohammed Deif.

Their supporters later took over the streets as their funeral procession snaked through Rafah, which bears scars of Israeli bombing from previous days. Another 31 people were killed in other Israeli strikes in Gaza since on Thursday, raising the overall death toll to 2,087 in 46 days of conflict.  Israel meanwhile said it was rotating 10,000 troops – meaning fresh soldiers were being prepared for possible future operations – a day after the Israeli prime minister, Benjamin Netanyahu, said Israel’s offensive may be an extended operation.

Hamas condemned the assasinations, with Sami Abu Zuhri, a spokesman, calling them a “big Israeli crime” for which it would pay. Al Jazeera’s Jacky Rowland, reporting from West Jerusalem, said Israel had turned to its historical tactic of targeting senior figures. “This could be seen as an acknowledgement that military tactics have not been delivering on several levels,” she said, including damage to its international reputation. Jane Ferguson, reporting from Gaza, said the Hamas commanders killed on Thursday had been implicated in the kidnapping of its soldier Gilad Shalit,

Who was freed in 2011 under a prisoner swap deal with Hamas. Ferguson said that Hamas and other Palestinian factions were still open to talks, an “indicator of how both sides … are aware that while they say they’re prepared to fight, they also know that they need a political solution at some stage”. Hamas is seeking an end to a seven-year Israeli-Egyptian blockade that has battered Gaza’s economy, while Israel wants guarantees that Hamas will disarm. -aljazeera

IS offered to Swap Aafia Siddiqui for James Foley

IS offered to Swap Aafia Siddiqui for James Foley