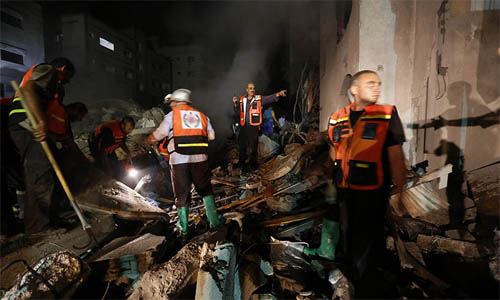 Hamas said Wednesday that an Israeli air strike killed the wife and child of its Gaza military chief, as a temporary ceasefire went up in smoke and Cairo truce talks froze. “The wife of the great leader was martyred with his daughter,” in a strike Tuesday night, Hamas’s exiled deputy leader Mussa Abu Marzuk wrote on Facebook while saying nothing about the fate of Ezzedine al-Qassam Brigades commander Mohammed Deif himself.

The Israeli military said it hit “more than 25 targets” in Gaza Tuesday but would not elaborate. Tuesday’s deaths of the woman and a two-year-old girl were the first as a result of Israeli air raids in Gaza since August 10. In a strike Wednesday morning on the southern Gaza town of Deir el-Balah a pregnant woman, three children and two men were killed, all members of the Aloah family, emergency services said. They said that the woman was nine months pregnant but medics were unable to save the foetus. More than a month of fighting between Israel and Hamas has killed at least 2,026 Palestinians and 67 on the Israeli side since July 8.

Hamas’s armed wing, the Ezzedine al-Qassam Brigades, said Israel had “opened the gates of hell on itself” by the killings and warned that the Jewish state would “pay the price for its crimes. “A 24-hour truce due to last until midnight (2100 GMT) collapsed late Tuesday afternoon, with each side blaming the other, The al-Qassam Brigades said in a statement that it fired 34 rockets into Israel throughout Tuesday, hitting Tel Aviv and the southern city of Beersheva. An Israeli military statement put the number fired at “about 50 “ but reported no casualties. “A rocket hit an open area in the Tel Aviv metropolitan area,” it said and confirmed that two rockets landed near Beersheva, which is home to around 200,000 Israelis.

Air raid sirens were also heard in Jerusalem, with Hamas claiming a rocket attack on the city. Police said it appeared that a rocket fell on empty ground in the occupied West Bank, outside Jerusalem. Israeli Prime Minister Benjamin Netanyahu ordered a new round of air strikes on Gaza and recalled his negotiators from Egyptian-mediated ceasefire talks in Cairo. “The rocket fire which broke the ceasefire also destroyed the foundation on which the talks in Cairo were based,” Netanyahu spokesman Mark Regev told AFP early Wednesday. “The Egyptian initiative is based on a total and unconditional cessation of hostilities, which was clearly broken when rockets were fired into Israel.” -dawn