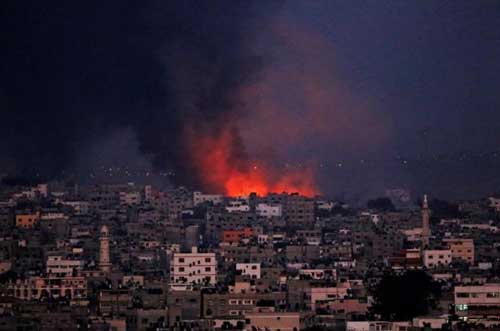 Two senior Hamas officials said the Palestinian militant movement will not extend a 72-hour ceasefire in Gaza that expires at 0500 GMT on Friday, accusing Israel of rejecting their demands for a truce. A leader of the Palestinian militants, a smaller faction in Gaza that is also present in Cairo-mediated truce talks, confirmed the factions had decided not to extend the ceasefire.

“We have one position, we refuse to extend the ceasefire, it is a final decision. Israel did not propose anything,” said one senior Hamas official after a long meeting with Egyptian mediators. “It did not agree to end the blockade” of Gaza, he added, referring to a key Hamas demand to end the four-week conflict that has killed almost 2,000 Palestinians. A senior militant leader said the decision was taken with Hamas. Asked if there were any chance it would be reversed before 0500 GMT, he responded: “Not likely. “

The delegation is led by a representative of Palestinian president Mahmud Abbas, whose Palestinian Authority in the West Bank signed a unity deal with Hamas in April to end a seven-year rift. On August 2, Israel gave a first indication it was ending operations in parts of Gaza, while continuing to bombard other areas ahead of fresh truce talks in Cairo. As a Palestinian delegation flew to Egypt in search of a ceasefire, the Israeli army conveyed a message to residents of part of northern Gaza that it was “safe” to return home.

“They have been informed it is safe for civilians to return to Beit Lahiya and Al-Atatra,” a spokeswoman told AFP, in what was understood to be a confirmation that troops had stopped operating there. Witnesses in the north confirmed seeing troops leaving the area as others seen leaving another flashpoint area in southern Gaza. It was the first time troops had been seen pulling back since the start of Israel’s devastating 26-day operation, which has so far claimed more than 1,660 Palestinian lives and forced up to a quarter of the territory’s population into exile.

The move came after an army spokesman told AFP Israel was “quite close to completing” the destruction of tunnels used for infiltrating southern Israel, the main objective of the ground operation. Despite the partial withdrawal, Israel’s security cabinet decided against sending a delegation to ceasefire talks with the Palestinian delegation in Cairo. A senior political official quoted by army radio said Hamas was “not interested in an arrangement”, with some commentators suggesting the pullback could signal the start of a unilateral Israeli withdrawal.