US for Taking Action Against Extremist Hindu MP 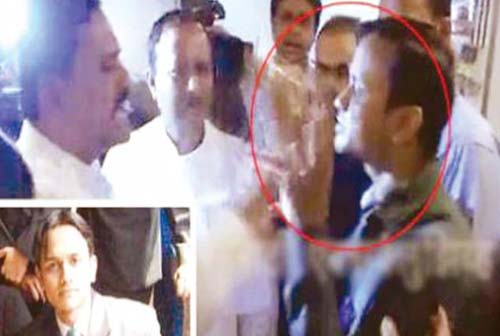 US for taking action against extremist Hindu MP

The United States expects India to take action under Indian law against members of Parliament belonging to the extremist Hindu party Shiv Sena who force-fed a fasting Muslim in New Delhi. “We are aware of the alleged reports and video, I think, of these MPs forcing a fasting Muslim to eat during Ramadan,” State Department Deputy Spokesperson Marie Harf told reporters at the daily press briefing.

“It’s certainly a topic we discuss all the time with various partners.  I have absolutely no preview for what our discussions will look like during his visit.” Shiv Sena has a history of inciting religious violence. It was blamed for inciting tensions between Hindu and Muslim communities during the 1993 Mumbai riots, in which about 900 people died.  The party was founded to keep south Indian migrants out of Maharashtra state and to halt the spread of Islam. It is currently the sixth largest in parliament with 18 seats and is an ally of the ruling Bharatiya Janata Party. -nation

Azadi March Final Round To Get Justice: Imran Khan

Azadi March Final Round To Get Justice: Imran Khan