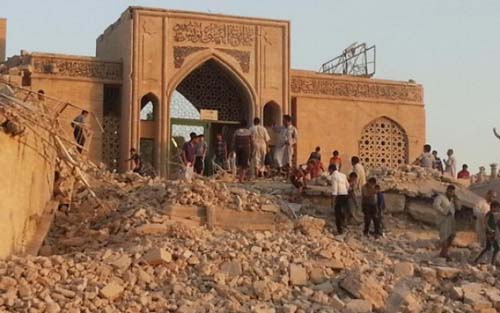 The new jihadist rulers of Iraq´s northern city of Mosul on Thursday completely levelled one its most well-known shrines, an official and witnesses told AFP. Shrine was built on the reputed burial site of a prophet known in the holy Quran as Hazrat Yunus (A.S) and in the Bible as Jonah.

“Islamic State completely destroyed the shrine of Nabi Yunus after telling local families to stay away and closing the roads to a distance of 500 metres from the shrine,” said the official. The endowment official, who spoke on condition of anonymity, and Mosul residents told AFP it took the extremists an hour to rig the shrine with explosives.

“They first stopped people from praying in it, they fixed explosive charges around and inside it and then blew it up in front of a large gathering of people,” said a witness who did not wish to give his name. The endowment official said the Islamic State jihadist group that overran large swathes of northern and western Iraq last month have now destroyed or damaged 30 shrines, as well as 15 husseiniyas and mosques in and around Mosul.

The official listed the most notable losses to Muslim heritage as being the shrines of Imam Yahya Ibn al-Qassem, Aoun al-Din and Nabi Danial. “But the worst destruction was of Nabi Yunus, which has been turned to dust,” he said. The Islamic State late last month proclaimed a “caliphate” spanning parts of Iraq and Syria. -thenews