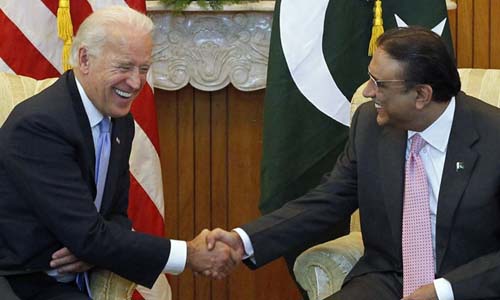 Former Pakistan President Asif Ali Zardari is going to have an Iftar dinner with US Vice President Joe Biden on Tuesday. He reached Washington on Sunday evening and was received by Pakistan’s Ambassador to the US Jalil Abbas Jilani.

This was the first time in Pakistan’s history that a former ruler was given full diplomatic protocol by a Pakistani ambassador.  Asif Ali Zardari arrival was announced by Prime Minister Nawaz Sharif‘s Special Assistant on Foreign Affairs Tariq Fatemi at a think tank here in Washington. He said that the government had decided to set a precedent by sending the ambassador to receive Zardari, adding that it was time that “political witch-hunting should come to an end”.

Fatemi is currently on an official visit to the US from the July 21 to 28 during which he is scheduled to visit senior officials of the State Department, Defence Department and the White House, He will be exchanging views on bilateral relations with top US officials, a spokesperson for the Foreign Office told Dawn earlier today. On July 28, Fatemi will also participate in a UN Security Council debate in New York on “United Nations Peacekeeping: Regional Partnership and its Evolution”. -dawn