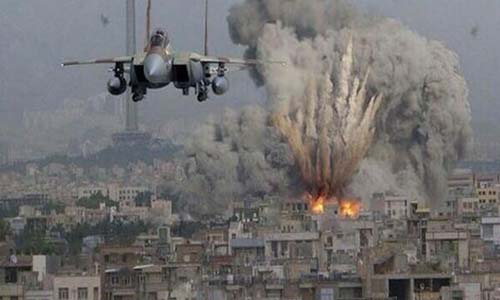 So far, Israel´s campaign, now in its ninth day, has killed 220 Palestinians, with a Gaza-based human rights group saying over 80 percent of them were civilians. In the same period, militants have fired more than 1,200 rockets at Israel, which on Tuesday claimed their first Israeli life. Hamas said it had rejected the Egyptian truce efforts because it had not been included in the discussions. The peace initiative continued on Wednesday, however, with a Hamas official meeting Egyptian leaders as Palestinian president Mahmud Abbas arrived in Cairo to join the diplomatic efforts. In the latest violence, four children died and several were wounded in an apparent Israeli naval bombardment of a beach in Gaza City on Wednesday afternoon, medics said.

The first strike hit at around 1300 GMT, prompting terrified children and adults on the beach to scatter. A second and third struck as they ran, setting fire to huts on the beach. The strikes appeared to be the result of shelling by the Israeli navy against an area with small shacks used by fishermen. Several hours later an army spokeswoman said that the military was still checking into the reports. Several children ran inside a hotel where AFP journalists saw at least three with shrapnel injuries. They were evacuated by ambulances, which also picked up more injured people from the beach, including a man who had part of his leg torn off.

The four bodies were later taken to Abu Hasira mosque, near where the boys had died. The boys, all from the Bakr family, were laid out, wrapped in the yellow flags of the Fatah party, in front of mourners. The Israeli military dropped flyers and sent text messages warning 100,000 people in northeastern Gaza to evacuate their homes ahead of an air campaign targeting “terror sites and operatives” in Zeitun and Shejaiya, two flashpoint districts east of Gaza City. An identical message was sent to Beit Lahiya in the north, echoing a similar army warning on Sunday, when more than 17,000 residents of the north fled for their lives, most seeking refuge in UN-run schools. -thenews