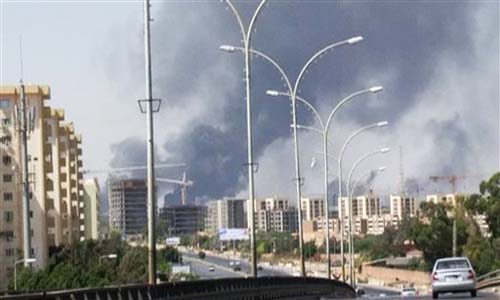 Libya’s main international airport has been hit by a new rocket attack a day after fighting forced it to close. At least one person has died and six have been injured at Tripoli airport, and 12 planes have been damaged in the attack. A government spokesman said Libya was considering calling for international forces to help re-establish security.

Libyan leaders have struggled to bring stability to the country since Muammar Gaddafi was removed from power in 2011. A security source told the BBC that the airport was attacked by a “large number of rockets, including Grad rockets” on Monday evening. They said one person from the force protecting the airport had been killed and six others injured and that the control tower had been hit by rocket fire. All flights to and from the airport have been suspended until at least Wednesday. Government spokesman Ahmed Lamine said that 90% of the planes stationed at the airport had been destroyed.

“The government has studied the possibility to bring international forces to enhance security”, he said at a press conference. “This would give the government time to build the state and institutions,” he added. He said millions of dollars worth of damage had been caused by the fighting. The fighting has led the United Nations to announce the withdrawal of all its staff from Libya. The mission concluded that it would not be possible to continue its work… while at the same time ensuring the security and safety of its staff” the UN said in a statement. Airports closed Tripoli international airport, 30km (18 miles) south of the capital, is Libya’s main transport link with the outside world.

The BBC’s Rana Jawad says the government is considering requesting help from international forces “to prevent chaos” The country’s second-largest airport in Benghazi has been closed for two months. Misrata airport, the only remaining airport with regular international flights, was also closed on Monday. It is believed that damage sustained by Tripoli’s air control tower was the reason for the closure of Misrata airport. There are no longer any flights from Libya to and from the EU, as the small regional airports still functioning do not meet EU standards.

The UN mission in Libya left the country in a land convoy via the border crossing with Tunisia. An alliance of militia groups has been attempting to dislodge rebels from the Zintan region who have controlled Tripoli airport for at least two years. Analysts say the rebels are seen by Libyans as both a blessing and a curse. On the one hand, in the absence of an effective army, they provide security across much of the country and protect the borders. On the other, they have been accused of human rights abuses, unlawful detention and of taking the law into their own hands. -bbc