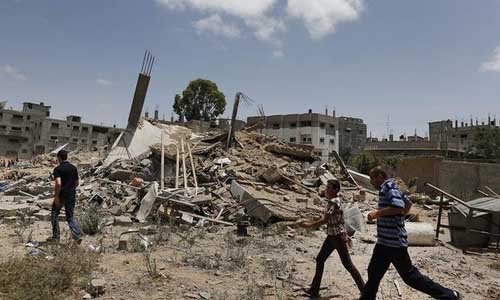 Israeli strikes on Gaza claimed the lives of a man and a woman early on Monday, medics said, raising the overall death toll to 172 as the campaign entered its seventh day. Both died of injuries sustained in Israeli air strikes on Sunday, when another eight people were killed.

Late on Sunday Israeli strikes killed a 65-year old man in Deir el-Balah, in the southern part of the strip, a 20-year-old in Rafah adjacent to the Egyptian border, and two in Khan Yunis, also in the south. One strike on the northern town of Jabaliya struck a house, killing a 14-year-old boy, emergency services spokesman Ashraf al-Qudra said. Shortly afterwards, another strike killed a woman in the Maghazi refugee camp in central Gaza, he said.

A man was killed in a raid on Beit Hanun in northern Gaza, where the Israeli army has warned it will sharply escalate its offensive and had urged residents to flee. Elsewhere another person succumbed to injuries from an earlier strike, Qudra said, giving an overall toll of 172 dead. About 1,230 people have been wounded. Witnesses in Rafah also reported seeing gunmen killing a man in the middle of the street in what appeared to be the execution of someone suspected of collaborating with Israel.

There was no immediate claim of responsibility from any of Gaza’s armed factions. Saturday was the bloodiest day by far of the operation, with 56 people killed. Israel began Operation Protective Edge before dawn on Tuesday in an attempt to halt cross-border rocket fire by militant groups. Since then, approximately 715 rockets have hit Israel, while another 160 were intercepted by the Iron Dome air defence system, the army said.

On Sunday, 80 rockets struck Israel, while another 22 were shot down, a spokeswoman said. No Israelis have been killed, and only three people have been seriously wounded since the start of the operation, one them a 16-year-old boy who was injured on Sunday during a strike on the coastal town of Ashkelon, medics said. On Sunday morning, the Israeli military said it had struck to date 1,320 “terror targets” across Gaza, including 735 rocket launchers, 64 training bases and militant compounds, and 32 Hamas leadership facilities.