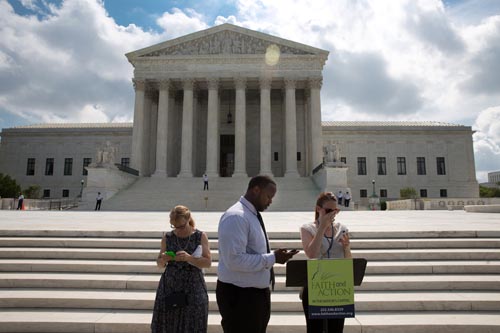 In a sweeping victory for privacy rights in the digital age, the Supreme Court on Wednesday unanimously ruled that the police need warrants to search the cellphones of people they arrest. While the decision will offer protection to the 12 million people arrested every year, many for minor crimes, its impact will most likely be much broader.

The ruling almost certainly also applies to searches of tablet and laptop computers, and its reasoning may apply to searches of homes and businesses and of information held by third parties like phone companies. “This is a bold opinion,” said Orin S. Kerr, a law professor at George Washington University. “It is the first computer-search case, and it says we are in a new digital age. You can’t apply the old rules anymore.” Chief Justice John G. Roberts Jr., writing for the court, was keenly alert to the central role that cellphones play in contemporary life. They are, he said, “such a pervasive and insistent part of daily life that the proverbial visitor from Mars might conclude they were an important feature of human anatomy.”

But he added that old principles required that their contents be protected from routine searches. One of the driving forces behind the American Revolution, Chief Justice Roberts wrote, was revulsion against “general warrants,” which “allowed British officers to rummage through homes in an unrestrained search for evidence of criminal activity.”  “The fact that technology now allows an individual to carry such information in his hand,” the chief justice also wrote, “does not make the information any less worthy of the protection for which the founders fought.” The government has been on a surprising losing streak in cases involving the use of new technologies by the police. In Wednesday’s case and in a 2012 decision concerning GPS devices, the Supreme Court’s precedents had supported the government. “But the government got zero votes in those two cases,” Professor Kerr said.

The courts have long allowed warrantless searches in connection with arrests, saying they are justified by the need to protect police officers and to prevent the destruction of evidence. But Chief Justice Roberts said neither justification made much sense in the context of cellphones. While the police may examine a cellphone to see if it contains, say, a razor blade, he wrote, “once an officer has secured a phone and eliminated any potential physical threats, however, data on the phone can endanger no one.” The possibility that evidence could be destroyed or hidden by “remote wiping” or encryption programs, Chief Justice Roberts wrote, was remote, speculative and capable of being addressed. The police may turn off a phone, remove its battery or place it in a bag made of aluminum foil.

Should the police confront an authentic “now or never” situation, the chief justice wrote, they may well be entitled to search the phone under a separate strand of Fourth Amendment law, one concerning “exigent circumstances.”  On the other side of the balance, Chief Justice Roberts said, is the data contained on typical cellphones. Ninety percent of Americans have them, he wrote, and they contain “a digital record of nearly every aspect of their lives — from the mundane to the intimate.”  He wrote, “According to one poll, nearly three-quarters of smartphone users report being within five feet of their phones most of the time, with 12 percent admitting that they even use their phones in the shower.” Even the word cellphone is a misnomer, he said.

“They could just as easily be called cameras, video players, Rolodexes, calendars, tape recorders, libraries, diaries, albums, televisions, maps or newspapers,” he wrote. Chief Justice Roberts acknowledged that the decision would make law enforcement more difficult. “Cellphones have become important tools in facilitating coordination and communication among members of criminal enterprises, and can provide valuable incriminating information about dangerous criminals,” he wrote. “Privacy comes at a cost.” But other technologies, he said, can make it easier for the police to obtain warrants. Using email and iPads, the chief justice wrote, officers can sometimes have a warrant in hand in 15 minutes. -nytimes