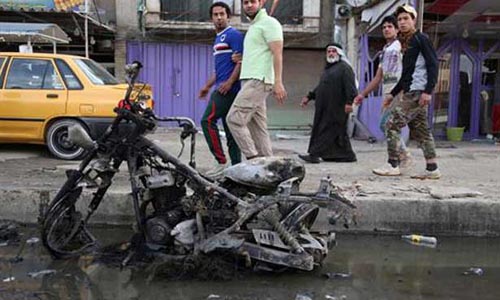 More than 1,000 people — at least three-quarters of them civilians — were killed this month as militants swept through large swathes of northern and western Iraq, the United Nations said Tuesday. At least 1,075 people were killed and 658 were injured in the country in the 17 days from June 5 to 22, Rupert Colville, a spokesman for the UN human rights office told reporters in Geneva.

He said the numbers “should be viewed very much as a minimum.” At least 757 civilians were killed and another 599 injured in the provinces of Nineveh, Diyala and Salah al-Din, he said. A number of the deaths were due to “verified summary executions and extra-judicial killings of civilians, police, and soldiers who were hors combat.” At least 318 more people — not necessarily all civilians — had been killed and 590 injured in Baghdad and areas in the south, “many of them as a result of at least six separate vehicle-borne bombs,” he said.

Militants from the Islamic State of Iraq and the Levant, or ISIL, have since early June overrun major areas of five provinces and driven to within less than 100 kilometres (60 miles) of Baghdad. The militant onslaught has displaced hundreds of thousands of people, alarmed world leaders, and put Prime Minister Nuri al-Maliki under pressure at home and abroad. -thenews