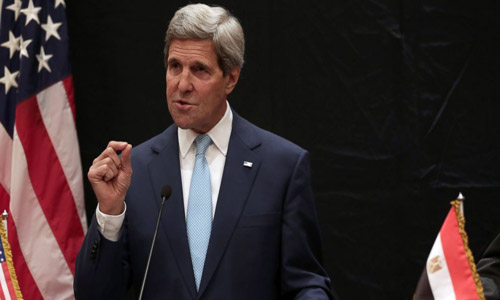 Nato foreign ministers convene Tuesday to discuss the Iraq crisis after US Secretary of State John Kerry pledged “intense” support to Baghdad in the fight against militants pushing towards the capital. Kerry made a surprise visit to Iraq on Monday as Sunni insurgents led by the militant Islamic State of Iraq and the Levant, or ISIL, seized a strategic town in the northern part of the country, while security forces retook a border crossing with Syria.

The militant advance has not only put Prime Minister Nuri al-Maliki under more pressure, but displaced hundreds of thousands and threatened to tear the country apart. A two-day meeting of foreign ministers from Nato countries begins Tuesday to discuss the situation in Iraq, as well as Ukraine. Earlier this month, Nato chief Anders Fogh Rasmussen said the alliance was following events in Iraq “closely”, but said he saw no role for it in the conflict. Kerry, who is expected to attend at least part of the talks in Brussels, met with Maliki and other Iraqi leaders Monday to urge a speeding up of the government formation process following April elections in order to face down the insurgents.

Washington’s “support will be intense, sustained, and if Iraq’s leaders take the necessary steps to bring the country together, it will be effective,“ John Kerry said at the US embassy in Baghdad’s heavily-fortified Green Zone. “This is a critical moment for Iraq’s future,” Kerry said. Maliki also emphasised the danger of the crisis, telling Kerry it “represents a threat not only to Iraq but to regional and international peace.“ -dawn