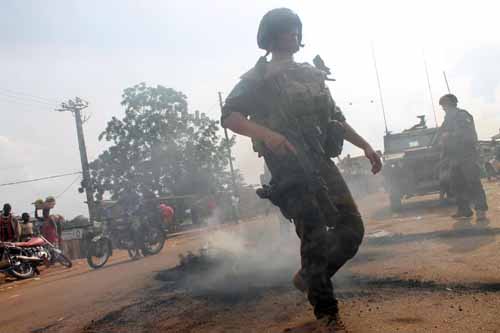 Gunmen have killed 17 Muslims at a camp in the centre of the strife-torn Central African Republic in the latest sectarian violence to wrack the impoverished country, peacekeepers said on Tuesday. “Seventeen people, all of them from the (Muslim) Fulani minority, were killed on Monday by young gunmen claiming to be from the (mostly Christian) anti-balaka” militia near the town of Bambari, an officer from the African Union force told AFP on condition of anonymity.

“Some of the bodies were mutilated and burnt by the assailants,” he said, adding that the killings sparked reprisal attacks in the town by the mostly Muslim Seleka ex-rebel force. He said the reprisals left several people dead and forced at least 6,000 to flee, most of them to a cathedral in the region. Anti-balaka in the capital Bangui denied that their fighters were responsible for the violence, with one of them, Brice-Emotion Namsio, putting the blame on “out-of-control youths acting on their own… who have been stepping up these attacks in the region.”

The Central African Republic has seen more than a year of unrest, with violence between ex-Seleka rebels and the largely Christian militias leaving tens of thousands dead and about a quarter of the population of some 4.5 million displaced. The central Bambari region, which lies some 400 kilometres (250 miles) from the capital Bangui and where the ex-Seleka rebels established their new headquarters, has seen several outbursts of violence this month. Fighting in a village outside the town of Bambari in early June left at least 22 people dead, both Muslim and Christian, according to security officials and last week 10 bodies showing signs of torture were found in a river in the region. –