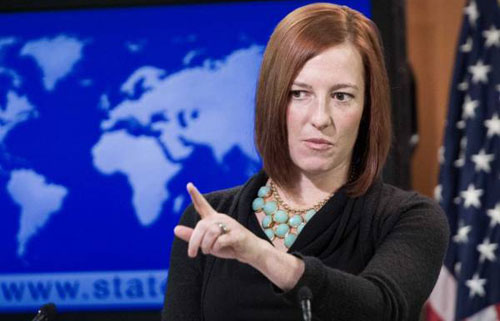 The United States Thursday condemned the “heinous” killing of a pregnant Pakistani woman beaten to death outside a courthouse, and called for her murderers to be swiftly tried. “We strongly condemn the murder of a woman outside the Lahore High Court on Tuesday,” State Department spokeswoman Jen Psaki said.

“We hope the perpetrators are quickly brought to justice in accordance with Pakistan‘s law,” she told reporters. Farzana Parveen was murdered in the eastern city by more than two dozen brick-wielding attackers, including her brother and father, for marrying against her family’s wishes — while police stood by. In a bizarre twist, her husband Mohammad Iqbal later admitted to AFP that he had killed his first wife to be with Parveen.

Psaki denounced “unjustifiable acts” against women around the world, especially “violence that occurs in the name of tradition and honor, such as so-called honor killings.” She welcomed statements by Pakistani leaders denouncing Parveen’s murder as well as new legislation protecting women’s rights in the country. “We encourage the full implementation of such laws as well as greater public awareness about these laws, especially in Pakistan‘s rural and tribal areas,” Psaki added. -samaa