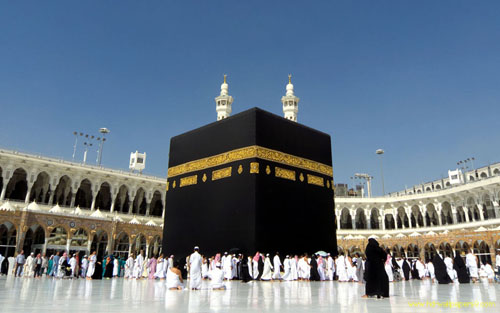 A ceremonial washing of the Holy Kaaba was performed on Thursday led by Emir Prince Mishal Bin Abdullah on behalf of the custodian of the two holy mosques King Abdullah.

According Saudi media reports, Sheikh Abdurahman Al-Sudais, head of the Presidency for the Affairs of the Two Holy Mosques, Sheikh Muhammad Al-Khozaim, deputy head of the presidency, several ministers, Islamic scholars, Muslim diplomats accredited to the Kingdom, as well as citizens and visitors to the Grand Mosque, took part in the washing ceremony. The washing ritual of the Kaaba, which is carried out before the beginning of the fasting month of Ramadan, begins with offering of two raka’a of voluntary prayers inside the Kaaba.

The interior walls are then cleansed with rose, duo and musk perfumes using white cloth.  Zamzam water mixed with rose perfume will then be splashed on the floor and then wiped with bare hands and palm leaves. After the cleaning, the floor and the walls are dried again with white cloth and tissues. The walls are then perfumed using large quantities of oud and rose perfume. The Kaaba will then be incensed, according to a report by Saudi Press Agency. – Samaa