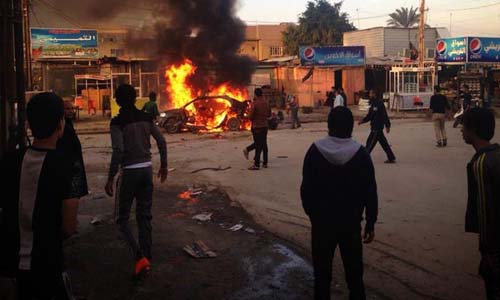 Attacks across Iraq, including a spate of car bombs in Baghdad and the northern city of Mosul, killed 63 people Wednesday in the bloodiest violence to hit Iraq since April elections. The worst of the blasts went off during the evening and left dozens of people wounded, fuelling fears a protracted surge in violence is pushing Iraq back into the brutal communal conflict that left tens of thousands dead in 2006 and 2007.

The bloodletting comes as political leaders jostle to build alliances and form a government, with Prime Minister Nuri al-Maliki in the driver’s seat in his bid for re-election but still short of an overall majority in parliament. Separate deadly sets of car bombs hit both the Iraqi capital and Mosul, in the north, in the evening. In Baghdad’s deadliest attack, a suicide car bomb exploded in north Baghdad, killing at least 16 people and wounding 50, security and medical officials said, speaking on condition of anonymity. Three other car bombs went off in the Amin, Sadr City and Jihad districts, killing a dozen more people. The blasts were the latest in a trend of militants setting off vehicles rigged with explosives during the evening, when Baghdad’s residents visit markets, restaurants and cafes. Previously, such attacks had typically been timed to go off during morning rush hour.

Elsewhere in and around the capital, gun attacks and explosions killed three people, officials said. In Mosul, one of the most violent areas of the country, twin car bombs set off by suicide attackers killed 21 people, including 14 soldiers and policemen, in the west of the city. Also in Nineveh province, of which Mosul is the capital, two other attacks left two people dead. No group immediately claimed responsibility. The blasts targeted homes belonging to ethnic Turkmen. The town, which is also populated by Arabs and Kurds, lies in a stretch of territory Kurdish leaders want to incorporate into their autonomous region over Baghdad’s objections. A soldier was also killed in Kirkuk province, which also lies in disputed land.

Insurgents often exploit poor communication between Arab and Kurdish security forces to carry out attacks in the area. Shelling in the militant-held city of Fallujah, a short drive west of Baghdad, killed three more people, a day after Human Rights Watch criticised the government for possibly violating the laws of war by shelling the city’s main hospital. All of Fallujah and parts of nearby Anbar provincial capital Ramadi have been out of government hands since the beginning of the year. Security forces have shelled Fallujah repeatedly for months. They insist they are targeting militant hideouts, but human rights groups and residents say civilians are bearing the brunt of the bombardment.

Violence in Iraq has surged to its highest level since 2008. The authorities blame external factors such as the civil war in neighbouring Syria, and insist wide-ranging operations against militants are having an impact. The unrest comes as incumbent Prime Minister Nuri al-Maliki pursues re-election following April 30 polls that put him in the driver’s seat with by far the highest number of seats. But the premier’s bloc fell short of an absolute majority on its own, and he will have to court the support of rivals, many of whom have refused to countenance a third term for Maliki. His opponents blame him for the marked deterioration in security in the past year, as well as rampant corruption and what critics say is insufficient improvement in basic services. Maliki, however, contends he has been hamstrung by a national unity government that snipes at him in public and has blocked his legislative efforts in parliament. -thenews