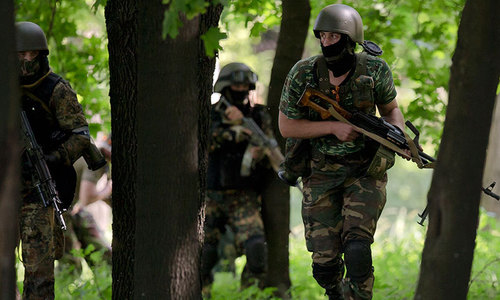 Four Tunisian police officers were killed in a “terrorist” attack overnight on the home of Interior Minister Lotfi Ben Jeddou in the west-central Kasserine region, a ministerial spokesman said Wednesday.

“Four police officers were killed and another injured during a terrorist attack with Kalashnikov rifles that targeted the Kasserine home of the interior minister,” spokesman Mohamed Ali Aroui told AFP. It was not immediately clear if anyone was in the house at the time, but the minister normally stays in the capital Tunis while his wife and children live in Kasserine.

After the attack, traces of blood could be seen on the exterior walls of the house and on the ground near the building. The assailants wore balaclavas and arrived on a pick-up truck, a local resident told AFP. Tunisia was hit by two political assassinations last year, amid a spate of violence aimed at the security forces. All were attributed to the jihadist movement which has gained momentum since the 2011 “Arab Spring” revolution. -dawn