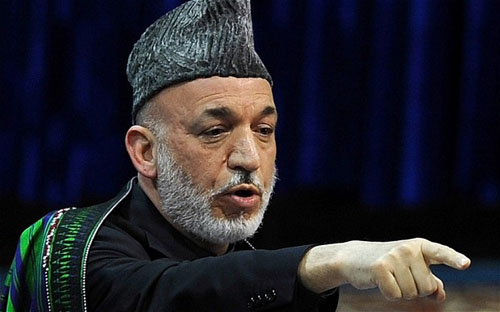 'LeT behind attack on Indian consulate

Afghan President Hamid Karzai on Monday accused Lashkar-e-Taiba (LeT) of being behind last week’s attack by gunmen on an Indian diplomatic mission in the west of his war-torn country.

On the eve of talks between India’s new Prime Minister Narendra Modi and his Pakistani counterpart Nawaz Sharif, Karzai blamed Lashkar-e-Taiba for Friday’s attack on the consulate in Herat, the latest in a string of assaults on Indian targets in Afghanistan. “According to the information that we have available to us — one given to us by a Western intelligence agency — the perpetrators were of Lashkar-e-Taiba,” Karzai told India’s Headlines Today television channel. “The incident is condemned by the Afghan people as it is condemned by the people of India. This was a clear, clear attack by terrorists,” said Hamid Karzai who was in New Delhi to attend Modi’s inauguration ceremony.

Although there were no casualties among Indian staff, at least two policemen were wounded when the heavily-armed attackers stormed a house close to the consulate and opened fire on the building in a pre-dawn assault that was eventually repelled by security forces. Lashkar-e-Taiba was blamed for the 2008 attacks by Pakistani gunmen in Mumbai which killed 166 people and triggered a complete breakdown in ties between New Delhi and Islamabad. Some analysts have interpreted Friday’s attack as an attempt by anti-India elements in Pakistan to test the resolve of Modi, a hardline Hindu nationalist. -samaa