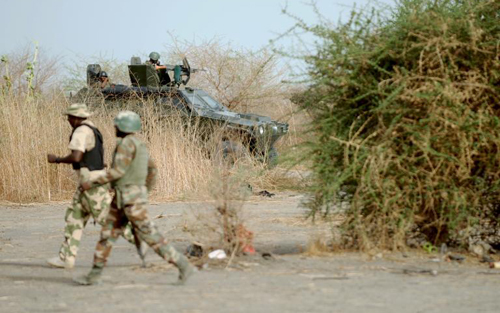 At least 24 people were killed on Sunday when Boko Haram gunmen raided a village in northeast Nigeria, where the Islamists have stepped up deadly attacks on villages in recent months, residents told.

Dozens of motorcycle-riding gunmen stormed Kamuya village in Borno state after sunrise as locals were heading to the weekly market, opening fire on residents. The attacks indicate how Boko Haram, who captured world attention after kidnapping more than 200 schoolgirls last month, can attack seemingly at will and the Nigerian military´s fragile grip on security. A state of emergency has been in place in Borno and two neigh bouring northeast states since May last year. “They came on motorcycles and blocked all routes leading into the village and opened fire indiscriminately on people, most of them traders from neigh bouring villages coming to the market,” said resident Bala Mshelia.

“They killed 24 people and took off into the bush. We are sure they are Boko Haram. “Terrified residents fled the village to the nearby town of Biu for fear of further attacks, Mshelia said by telephone.”The gunmen said they would return for more attacks and we felt we had to leave to save our lives,” said another resident, Dauda Ibrahim, who gave a similar account of the incident. Boko Haram has escalated attacks in Borno´s countryside, raiding villages where they kill residents, loot food supplies and set fire to homes. On Wednesday suspected militant fighters killed 34 people in raids on four villages in two districts of Borno state, according to figures provided by residents. -thenews