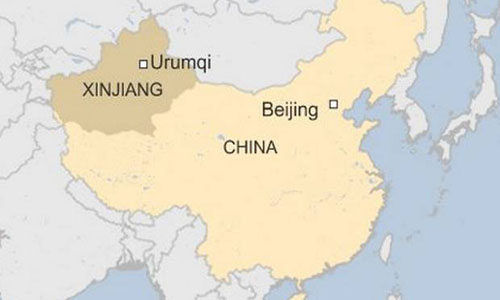 An explosion on Thursday hit Urumqi, capital of the restive Chinese region of Xinjiang which is home to mostly Muslim Uighurs, the official Xinhua news agency reported. An unknown number of people were injured in the blast, which occurred near a park in the city, the agency said in a short dispatch.

Pictures posted on Weibo, a Chinese equivalent of Twitter, showed flames on a tree-lined road, and smoke billowing over market stalls behind a police roadblock. “There were multiple strong explosions in the morning market at the Cultural Palace in Urumqi,” wrote one poster who said he was less than 100 metres (yards) from the scene. “I saw flames and heavy smoke as vehicles and goods were on fire while vendors escaped leaving their goods behind.

“The vast, resource-rich far-western region has seen periodic violence which has increased and sometimes spread beyond it in recent months. Beijing says it faces terrorism from a violent separatist movement there, driven by religious extremism and foreign groups. Critics say the security threat in Xinjiang is exaggerated by Beijing to justify hard-line measures, and instead point to economic inequality and cultural and religious repression of Uighurs as causes of unrest. On April 30, the final day of a visit by President Xi Jinping to the region, assailants armed with knives and explosives carried out an attack at a railway station in Urumqi, killing one person and wounding 79.

Two attackers also died. The main plotter had formulated plans from abroad, then eight days before the incident ordered 10 people to make an explosive device and choose a target, Xinhua said in a later report. In March attackers went on a stabbing spree at a railway station in the southwestern city of Kunming, killing 29 people and wounding 143 in an incident dubbed “China´s 9/11” by state media. Four of the assailants were shot dead by police.  -thenews