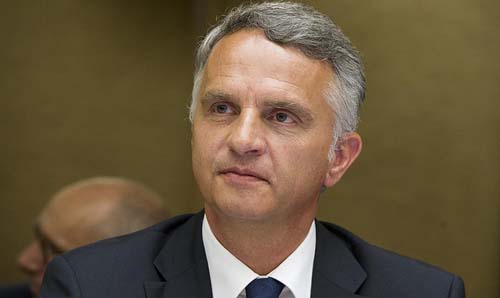 NATO said Wednesday it had seen no sign of Russian troops withdrawing from the border with Ukraine, despite President Vladimir Putin’s claim they have been pulled back.

“We have no indication of a change in the position of military forces along the Ukraine border,” a NATO military official said. Putin had said earlier that in response to Western concerns of a possible Ukraine invasion, Moscow had pulled troops back. “We were told constantly about concerns over our troops near the Ukrainian border. We have pulled them back,” Vladimir Putin.

“Today they are not at the Ukrainian border but in places of regular exercises, at training grounds,” he said after meeting Swiss president and current OSCE chief Didier Burkhalter. US and NATO officials estimate Russia massed 40,000 troops on the border with Ukraine as the Kiev government battles pro-Kremlin militias. Rasmussen on Wednesday also said NATO “will not hesitate to take further steps if necessary” to beef up defenses on its eastern fringe. “Those steps might include enhanced exercises, revised defense plans and a proper deployment,” he said following talks with Poland´s foreign and defense ministers.-thenews