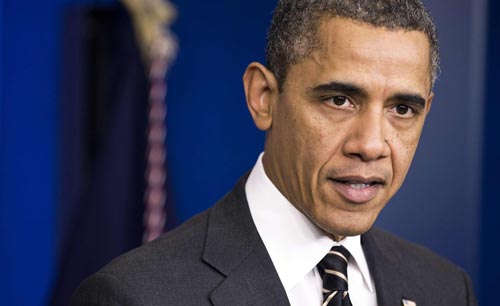 US President Barack Obama on Tuesday described the kidnapping of more than 220 schoolgirls by militants in Nigeria as “heartbreaking” and “outrageous” as Washington deployed military experts in the hunt for the children.

Obama urged global action against Boko Haram and confirmed Nigerian leaders had accepted an offer to deploy US personnel there, soon after residents said the extremist group had seized eight more girls, aged between 12 and 15, again in the embattled northeast. The first group of girls were taken three weeks ago, and concerns have been mounting about their fate after Boko Haram chief Abubakar Shekau claimed responsibility, saying his group was holding the schoolgirls as “slaves” and threatening to “sell them in the market”. Speaking to US broadcaster ABC, Barack Obama said: “It’s a heartbreaking situation, outrageous situation.””This may be the event that helps to mobilise the entire international community to finally do something against this horrendous organisation that’s perpetrated such a terrible crime,” he added.

The team sent to Nigeria consists of “military, law enforcement, and other agencies”, Obama said, and will work to “identify where in fact these girls might be and provide them help”. He denounced Boko Haram as “one of the worst regional or local terrorist organisations”. US officials have voiced fears that the more than 220 girls, aged between 16 and 18, have already been smuggled into neighbouring countries, such as Chad and Cameroon. The governments of both denied the girls were in their countries. Their fate has sparked global outrage and may constitute a crime against humanity according to the UN. -dawn