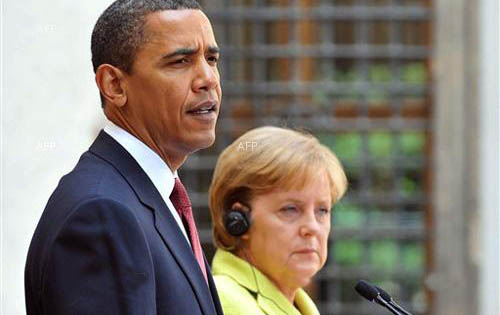 US President Barack Obama and German Chancellor Angela Merkel will discuss the escalating Ukraine crisis on Friday after Kiev brought back military conscription and a pro-Russian rebellion in the east threatened the ex-Soviet republic with disintegration.

The White House meeting between Barack Obama and Merkel will be their first since the start of the unrest and Russia´s annexation of Crimea in March. Kiev´s decision to reinstate conscription, decreed by interim president Oleksandr Turchynov, came after insurgents tightened their grip over more than a dozen eastern cities and towns. Around 300 militants hurling petrol bombs and bricks stormed the six-storey prosecutor´s building in Donetsk, beating up outnumbered riot police and stripping them of their shields and batons.

Ukrainian media reported that a prosecutor´s office in the town of Horlivka and a police station in Krasnoyarsk were also overrun. The violence took place as mass pro-Russia rallies were held in Donetsk and in annexed Crimea. Gunfire and heavy detonations were heard Friday just to the north of Ukraine´s rebel-held town of Slavyansk, insurgents and journalists said. A helicopter was earlier also seen circling low in what appeared to be part of an attack by Ukrainian forces, said the rebels, who had set a roadblock on fire to produce cloaking smoke.

Kiev´s Western-backed government has admitted its security forces are helpless to halt the expanding rebellion it accuses Moscow of masterminding. Turchynov on Wednesday accused law enforcement units in the east of “inaction” or even working with the rebels in an act of “treachery”. He also put Ukraine´s current army of 130,000 on “full combat alert” because of fears an estimated 40,000 Russian troops massed on the border for the past two months could invade. thenews