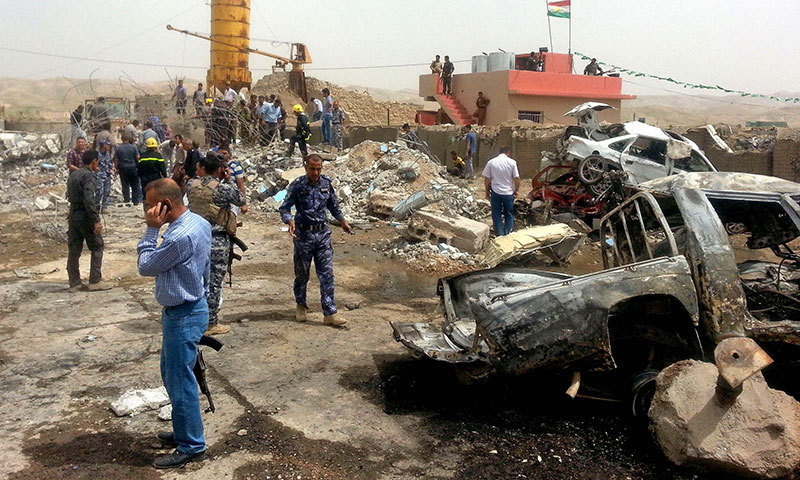 Attacks in Iraq left 19 people dead Tuesday while security forces said they killed 25 militants near Baghdad amid worries insurgents are encroaching on the capital weeks ahead of elections.

The latest violence is part of a protracted surge in nationwide bloodshed that has left more than 2,400 people dead since the start of the year and sparked fears Iraq is slipping back into the all-out sectarian fighting that plagued it in 2006 and 2007. The unrest has been driven principally by anger in the Sunni Arab community over alleged mistreatment at the hands of the Shia-led government and security forces, as well as the spillover from the civil war in neighbouring Syria.

In Tuesday’s bloodiest incident, soldiers killed 25 militants in an ambush southwest of Baghdad, the capital’s security spokesman Brigadier General Saad Maan said. Maan said the fighters were part of the jihadist Islamic State of Iraq and the Levant, and were planning to attack an army base they had attempted to hit last week. Despite the tactical success, the killings illustrate the growing ambition of ISIL militants seeking to fight their way into Baghdad, with analysts and officials worrying they are seeking to derail the April 30 elections.

Elsewhere in Iraq on Tuesday, attacks north of the capital killed 19 people, security and medical officials said. Attacks struck in the restive provinces of Diyala, Salaheddin, Kirkuk and Nineveh, and included the murder of six members of the same family, who were shot dead inside their home in the main northern city of Mosul. A car bomb set off by a suicide attacker at a checkpoint in the city of Tuz Khurmatu killed four policemen, while three others were killed by a similar attack in Mishahda, just north of Baghdad. Shootings and bombings in and around Baquba, Tikrit, Baiji and Mosul left six others dead.

Diplomats and analysts have urged the government to reach out to the Sunni community to undermine support for militancy. But with the parliamentary elections looming, Prime Minister Nuri al-Maliki and other Shia leaders have not wanted to be seen as appeasing political rivals. Near-daily bloodshed is part of a long list of voter concerns that also include lengthy power cuts, poor wastewater treatment, rampant corruption and high unemployment. The United Nations has warned that the election campaign, which started a week ago, will be “highly divisive” underscoring fears that the polls could worsen the long-standing political deadlock, in which Iraq’s fractious unity government has passed little in the way of significant legislation.

“Campaigning will be highly divisive,” UN envoy Nickolay Mladenov told AFP in an interview on April 1. “Everyone is ratcheting it up to the maximum, and you could see this even before officially the campaign started.” Mladenov added: “I would hope that it would be more about issues, and how the country deals with its challenges, but at this point, it’s a lot about personality attacks.” “The efforts to reach across the sectarian divide are very weak.” -Dawn