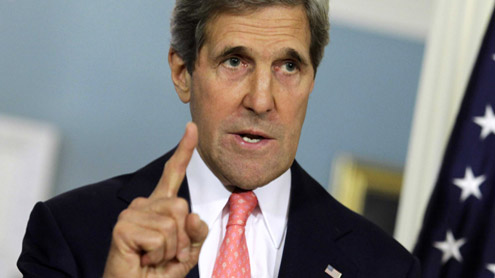 NATO suspended all practical cooperation with Russia on Tuesday in protest at its annexation of Crimea, and ordered military planners to draft measures to strengthen its defenses and reassure nervous Eastern European countries.

Foreign ministers from the 28-nation, U.S.-led alliance were meeting for the first time since the Russian occupation of Ukraine’s Crimea region touched off the worst East-West crisis since the Cold War. NATO Secretary-General Anders Fogh Rasmussen said Russia’s actions meant there could be no “business as usual”. “So today, we are suspending all practical cooperation with Russia, military and civilian,” he told a news conference. German Foreign Minister Frank-Walter Steinmeier said NATO’s future relationship with Russia would depend, among other things, on whether Russia started withdrawing troops from the Ukrainian border.

Ministers also ordered military commanders to draw up plans for reinforcing NATO’s defenses to shore up confidence among the alliance’s Eastern European members, including former Soviet republics in the Baltics, that NATO is ready to defend them. The measures could include sending NATO soldiers and equipment to Eastern European allies, holding more exercises, ensuring NATO’s rapid-reaction force could deploy more quickly, and reviewing NATO’s military plans. Military planners will come back with detailed proposals within weeks, a NATO official said. U.S. Secretary of State John Kerry said NATO’s preference was for a de-escalation and diplomatic route out of the crisis.

“At the same time, it is important for everybody in the world to understand the NATO alliance takes seriously this attempt to change borders by use of force,” he said. Russia’s announcement on Monday that it would move a battalion back from close to the Ukrainian border was a small but welcome gesture, he told a news conference. “The question now is: Is there a way to build on that in order to be able to find a way to move the masses of troops back and truly de-escalate?” he said. Rasmussen said earlier that NATO had seen no sign Russia was withdrawing its troops from the Ukrainian border.

The United States and other NATO allies have already responded to the crisis by offering more planes to take part in regular NATO air patrols over the Baltic States, which were once Soviet republics. The United States has beefed up a previously planned training exercise with the Polish air force. A Pentagon official told Reuters on Tuesday that the top U.S. general in Europe was looking at options, including moving a U.S. warship to the Black Sea and bolstering scheduled NATO exercises.

General Philip Breedlove, who is both NATO’s supreme allied commander Europe and head of the U.S. military’s European Command, was “going to look at the full spate of upcoming NATO exercises” to see if there were ways they could be enhanced, the U.S. official said. Germany had offered six Eurofighter jets for Baltic air patrols and one command ship for a mine hunting unit in the Baltic Sea, a NATO source told Reuters. The suspension of NATO cooperation with Russia would mean Russia could not participate in joint exercises such as one planned for May on rescuing a stranded submarine, a NATO official said.

But Rasmussen said he expected Russia’s cooperation with NATO in Afghanistan – on training counter-narcotics personnel, maintenance of Afghan air force helicopters and a transit route out of the war-torn country – to continue. Contacts between NATO and Russia at ambassadorial level or higher can also go on, so the two sides can discuss ways out of the crisis. NATO agreed at a meeting with Ukraine’s foreign minister to step up cooperation with training and other programs to help modernize Ukraine’s armed forces. The alliance will offer Ukraine more chances to take part in NATO exercises, Rasmussen said. Ukraine has given NATO members a wish-list of “technical equipment” it needed for its armed forces but this did not include weaponry, Ukraine’s Foreign Minister Andrij Deshchitsya told a news conference after meeting NATO ministers. He said NATO members would send experts to Kiev next week to see what Ukraine needed.

As NATO ministers convened, Russia warned Ukraine against integration with NATO, saying Kiev’s previous attempts to move closer to the defense alliance had unwelcome consequences. Ukraine’s new pro-Western leadership has said it is not seeking membership of the Western alliance. In another sign of NATO support, Romanian President Traian Basescu said the United States had asked to boost the number of troops and aircraft it has stationed at an air base in his country, which has a border with Ukraine.

But Polish Prime Minister Donald Tusk said on Tuesday that the pace at which NATO was increasing its military presence in Poland was unsatisfactory. Polish Foreign Minister Radoslaw Sikorski, who said earlier he would be satisfied if NATO located two heavy brigades in Poland, said on arrival at the NATO meeting that he would welcome any NATO forces being stationed there. Germany’s Steinmeier said the basing of a significant NATO force in Poland would not be completely in line with a 1997 treaty on NATO-Russian cooperation. -Samaa.Tv