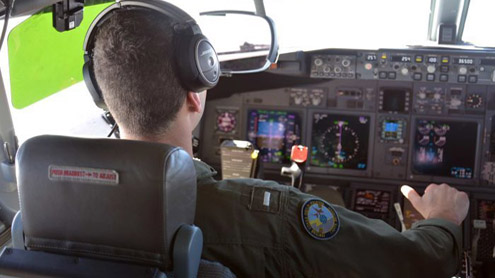 Hopes of speedily locating and retrieving the objects spotted by aircraft during the search for missing  Malaysian flight MH370 were dashed early on Tuesday when the Australian Maritime Safety Authority suspended search operations for the day due to bad weather. “The Australian Maritime Safety Authority’s search for any signs of the missing Malaysia Airlines flight MH370 has been suspended for today due to poor weather conditions in the search area,” the authority said in a statement. As weather halted the search for the Boeing 777, which disappeared 16 days ago with 239 people on board, friends and relatives of the victims continued to push for more information. Late on Monday Malaysia Prime Minister Najib Razak announced that new satellite information had lead investigators to conclude that flight MH370 had crashed in the southern Indian Ocean, 2,500km south west of Perth, without any survivors.

Beijing immediately called on Malaysia to provide the evidence to support the conclusion and said it would press ahead with its search for the missing aircraft. In China, home to two-thirds of the flight’s passengers, angry families spilled out of their hotel on Tuesday morning, many holding placards and wearing T-shirts asking people to “pray for MH370”. They held a brief demonstration outside the hotel before police escorted them to waiting commuter buses, which were taking them to the Malaysian embassy to continue their protest. The protesters are now marching toward the embassy.Prior to the dramatic Najib statement Australian naval ship HMAS Success had been scouring the seas for two objects spotted on Monday by aircraft searching a remote area of the Indian Ocean about 2,500km south west of Perth.

Australian and Chinese aircraft reported they had seen several objects floating in the waters there. Tony Abbott, the Australian prime minister, cautioned they might be unconnected to the aircraft, but said the search would focus on finding them. However, due to rough seas HMAS Success departed the search early on Tuesday morning without locating and retrieving the objects. The ship is now in transit until seas abate.“A sea state ranging between 7 to 8 is forecast today with waves up to two metres and an associated swell of up to four metres. The area is also forecast to experience strong gale force winds of up to 80km/h, periods of heavy rain, and low cloud with a ceiling between 200 and 500 feet,” said AMSA in a statement.

AMSA said it had undertaken a risk assessment and determined that the current weather conditions would make any air and sea search activities hazardous and pose a risk to crew. AMSA said it had consulted with the Australian Bureau of Meteorology and weather conditions are expected to improve in the search area in the evening and over the next few days. Search operations are expected to resume tomorrow, if weather conditions permit, said the agency On Monday, Flight Lieutenant Josh Williams, the pilot of the Australian P3 Orion, told journalists that several objects had been spotted.

“The first object was rectangular in shape and slightly below the ocean,” Reuters quoted him as saying. “The second object was circular, also slightly below the ocean. We came across a long cylindrical object that was possibly two metres long, 20cm across.” Hours earlier a Chinese aircraft crew combing the area had seen “two relatively big floating objects with many white smaller ones scattered within a radius of several kilometres”, according to Xinhua, the Chinese news agency. AMSA said the two sightings were separate but within Monday’s search area.

The latest sightings and three sets of satellite images – from US, Chinese and French sources – have narrowed the search in recent days to a section of a roughly 60,000 square kilometre area 2,500km southwest of Perth.While Australia is leading the search in the area, China has bolstered its presence there and now has 10 ships in the southern corridor, as well as aircraft. Ten aircraft were deployed on Monday to the search zone. In addition to the two Chinese transport aeroplanes, they include sophisticated US, Japanese and Australian surveillance aircraft and three long-range jets.

The largest search for a missing airliner in aviation history shifted from the South China Sea to the southern Indian Ocean last week after Australia said images it had received from a US satellite company were a “credible” lead.A British navy ship equipped with advanced underwater sensors is on its way to the search area from the Gulf.Flight MH370 took off from Kuala Lumpur for Beijing in the early hours of March 8 and disappeared from radar within an hour. Satellite data indicated that it had flownalong one of two arcs, a northern corridor that stretches to Kazakhstan and a southern corridor that runs into the Indian Ocean.  -Ft.com