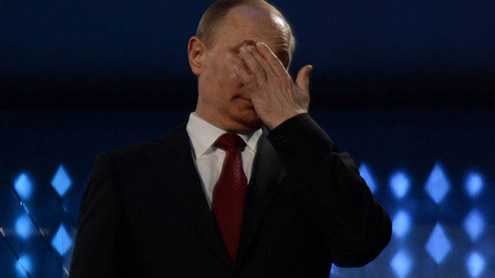 The Kremlin said Tuesday that it now considers Crimea part of Russia following the signing of a treaty, despite strong objections from the international community which insists the Black Sea peninsula is Ukrainian territory. The statement came soon after France’s foreign minister said that leaders of the Group of Eight world powers had suspended Russia’s participation in the club amid tensions over Ukraine. “The Republic of Crimea is considered to be part of Russia from the date of the signing of the treaty,” the Kremlin said, minutes after President Vladimir Putin signed the treaty with Crimean leaders on bringing the Russian-speaking region under Kremlin rule.

Russian President Vladimir Putin approved the draft bill on Tuesday for the annexation of Crimea, a key move in a flurry of steps to formally take over the Black Sea peninsula. The decree signed by Putin and posted on the official government website Tuesday morning is one of the steps to formalist the annexation of Crimea. Putin has warned that he would be ready to use “all means” to protect Russian speakers in eastern Ukraine, and Russia has built up its forces alongside the border between the two countries, raising fears of an invasion. Also today, France’s foreign minister said that leaders of the Group of Eight world powers had suspended Russia’s participation in the club amid tensions over Ukraine and Russia’s incursion into Crimea.

The other seven members of the group had already suspended preparations for a G-8 summit that Russia was scheduled to host in June in Soc hi. France’s Laurent Fabians went further Tuesday, saying on Europe-1 radio that ”concerning the G-8 … we decided to suspend Russia’s participation, and it is envisaged that all the other countries, the seven leading countries, will unite without Russia.’Fabians did not give further details. The US and European Union on Tuesday announced new sanctions against Russia over its actions in the Crimean Peninsula.

The sanctions followed a referendum in the Crimean region whose results showed 96.77 per cent of voters in the mostly Russian-speaking region of Ukraine had opted for Kremlin rule in what would be the most radical redrawing of the map of Europe since Kosovo’s 2008 declaration of independence from Serbia. The West and Ukraine have described the Crimea referendum as illegitimate. Earlier on March 15, Russia vetoed a Western-backed resolution condemning the Crimea referendum at a UN Security Council emergency vote, but China abstained, isolating Moscow further on the Ukraine crisis. Dawn