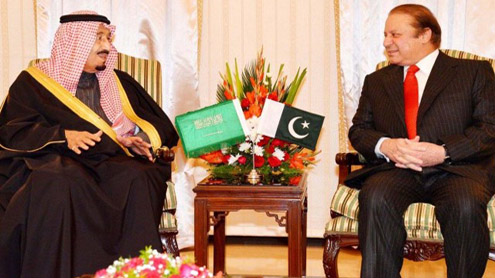 Saudi Arabia loaned $1.5 billion to Pakistan last month to help Islamabad shore up its foreign exchange reserves, meet debt-service obligations and undertake large energy and infrastructure projects, Pakistani officials have told Reuters. The Saudi assistance has contributed to a sharp recovery of the Pakistani rupee, which rose to a nine-month high of 97.40 from 105.40 against the dollar between March 4 and 12, its strongest rally in 30 years. “On a personal guarantee of the prime minister, Saudi Arabia has given $1.5 billion, which has helped bail out the rupee,” one senior Pakistani government official close to the deal told Reuters, requesting anonymity as he was not authorized to disclose the source and purpose of the funding.

The governor of the Saudi central bank declined to comment, and officials gave no details of the loan terms. Another top official who is based in Lahore said the money went into an account known as the Pakistan Development Fund set up to channel money from “friendly countries” like Saudi Arabia and the United Arab Emirates. “We have a promise of a total $3 billion, of which $1.5 billion has been received so far,” the second official said. “Most recently, we got $750 million from the Saudis.” Pakistani Prime Minister Nawaz Sharif has long enjoyed close relations with the Saudi royal family. After his second term as prime minister was ended by a military coup in 1999, he was sent into exile in Saudi Arabia.

Prince Alwaleed bin Talal, the Saudi financier and member of the House of Saud, has described Sharif as “Saudi Arabia”s man in Pakistan”. Pakistani Finance Minister Ishaq Dar confirmed on Wednesday that $1.5 billion was received under the development fund but declined to comment on the source. “Why do you want to expose our friends?” he told reporters. “The countries who have helped us don”t want us to disclose the source.”Dwan