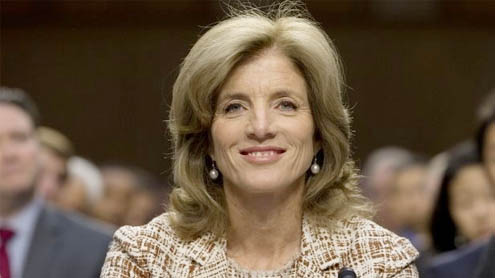 Former first daughter Caroline Kennedy has sailed through a confirmation hearing on her way to becoming the US ambassador to Japan.

Ms Kennedy, 55, the only surviving child of former President John Kennedy, told a Senate panel she would focus on trade and military ties if confirmed.A lawyer by training, Ms Kennedy was a key Obama supporter in 2008 and 2012, but has largely shunned political life.apan is the US’ fourth-largest trading partner and home to a Navy fleet.

On Thursday, Ms Kennedy faced gentle questioning, with several senators on the foreign relations committee saying she would be a great ambassador, all but assuring her confirmation to the post.During the hearing, she also noted the significance of her nomination 50 years since her father’s presidency, focusing on his tenure instead of his 22 November 1963 assassination.

If confirmed, Ms Kennedy said she would be “humbled to carry forward his legacy in a small way and represent the powerful bonds that unite our two democratic societies”.Ms Kennedy would become the third generation of her family to serve in the US diplomatic corps. Her grandfather, Joseph Kennedy Sr, was ambassador to Britain, while her aunt, Jean Kennedy Smith, was ambassador to Ireland.But she has not joined other members of the Kennedy clan in running for office.She considered running for a New York Senate seat when Hillary Clinton became secretary of state in 2009, but declined, citing personal reasons. – BBC