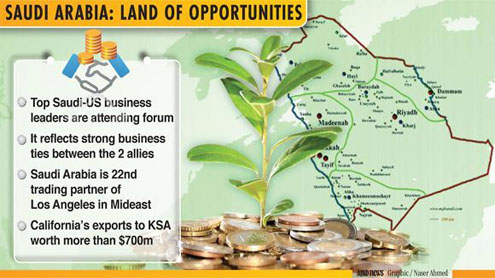 Saudi Arabia is offering $1 trillion worth of investment opportunities in vital sectors such as oil and gas, petrochemicals, transport, electricity and desalination to American businessmen and businesswomen at a major forum in Los Angeles.

Commerce and Industry Minister Tawfiq Al-Rabiah is one of the keynote Saudi speakers at the three-day Saudi-US Business Forum that opened on Monday.Officials and business leaders attending the event will explore how US companies can participate in the Kingdom’s economic expansion and build new and lasting business ties between their executives.The Committee for International Trade (CIT), the Saudi-US Trade Group (SUSTG) and the US-Saudi Arabian Business Council are organizing the event.

“American businesses at every level can benefit from attending the forum to learn how to get involved in the $1 trillion-plus trade and investment opportunities that Saudi Arabia represents over the next decade,” said Omar Bahlaiwa, secretary-general of CIT.“We look at Los Angeles not only as a single city, or California as a single state,” SUSRIS (Saudi-US Relations Information Service) quoted him as saying.

“We look at California’s standing in the world, the ninth largest economy, just behind Brazil and ahead of the booming country of India. This is a very important market. California is home to more Fortune 500 companies than any other US state,” he said.Bahlaiwa said Saudi officials had made two successful preparatory visits to California.
“We’ve found lots of enthusiasm and friendship on all levels of the public and private sectors. We are working closely with many new partners for the forum — chambers of commerce, business roundtables, the mayor’s office and many others,” he said.

This is the third forum organized by CIT in US cities.The previous forums were in Chicago and Atlanta.“During this period of severe global economic downturn and historic social and political upheaval across many regions including the Middle East, Saudi Arabia remains a stable and reliable partner,” Bahlaiwa said.It is not only the regional economic powerhouse but also a leading voice for moderation and dialogue among Arab states and the Islamic world, he added. – ArabNews

US to seize New York skyscraper secretly owned by Iran