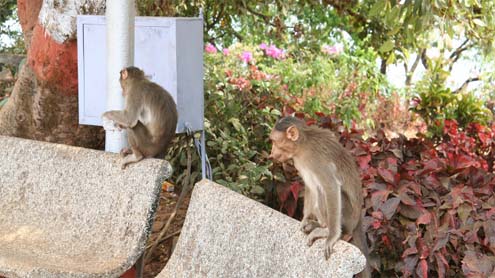 If any state in the union best represents the dangers of invasive species, it’s Florida. The Sunshine State is home to what’s been a raging Burmese python invasion for some decades. And its Cuban tree frog problem isn’t doing the ecosystem any favors either.

But the state has a new issue: invasive monkeys—with herpes. There are about 1,000 feral Rhesus monkeys living in Florida right now. Among those scooped up by wildlife officials over the years, most were found to be carriers of the Herpes B virus, and this week, the colony was declared a public health hazard. It’s believed a small handful of the wild animals originally landed in the state in the 1930s, courtesy of  “Colonel” Tooey, a tour operator who wanted to give visitors a Tarzan-inspired experience of Florida’s Silver River State Park.

Tooey reportedly kept the monkeys sequestered on an island, but they learned to swim to the shore, easily reaching the mainland, and moving out, putting down roots as far as Jacksonville, over a hundred miles away.Herpes B doesn’t cause serious symptoms in these particular animals—in fact, it’s fairly common among them—but in humans, it can lead to neurological impairment or fatal encephalomyelitis, an inflammation of the brain and spinal cord leading to death.Florida’s Rhesus monkeys are known to act aggressively towards people, and the state’s Fish and Wildlife Conservation Commission, concerned the animals could spread their disease to humans or otherwise injure them, are warning tourists and natives to be aware and keep their distance. – YahooNews