Screams of joy in Tokyo as city awarded 2020 Olympics 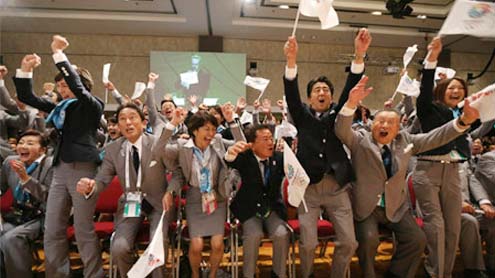 Screams of joy in Tokyo as city awarded 2020 Olympics

TOKYO: Tokyo celebrated after being awarded the 2020 Olympic Games on Sunday, with a huge roar arising from thousands gathered in a park in the early hours of a grey, humid morning and people embracing on street corners in the city.

Tokyo overcame a worsening crisis at a nuclear plant 230km (140 miles) away as well as a one-time lack of local support to convincingly beat rivals Istanbul and Madrid for the right to stage the Games for the second time.Golden streamers fell from the ceiling of a gymnasium in Komazawa Park, built for the 1964 Games when Japan became the first Asian nation to host them, where organisers estimated some 2,000 people were gathered for a night of events including concerts and a midnight fun run before the decision was broadcast on a giant screen shortly after 5:00 am (2000 GMT).

People screamed, embraced and waved Japanese flags, chanting “Tokyo, Tokyo, Tokyo.” Some held banners saying “Celebration!” “I’m really, really happy, because everyone was saying Madrid would win,” said Ryoko Abe, 34, who brought her one-year-old son Shunosuke because it would be a “good memory for him”.Japanese Prime Minister Shinzo Abe had made an impassioned speech to International Olympic Committee members at the Buenos Aires vote. It completed the final push for the Games which Tokyo has touted as everything from more stimulus for an economy tiptoeing back from stagnation to the final step of recovery from a devastating 2011 earthquake and tsunami that set off multiple reactor meltdowns at the Fukushima nuclear plant.

Fight to recover: “Having the Olympics will give us a chance to show the world how hard we’ve fought to recover – and thank the world for their support,” said Tomoko Tanaka, a 33-year-old housewife who had come to Komazawa Park for the nightlong countdown events. Despite the Tokyo bid committee’s prediction of a three trillion yen ($29.99 billion) economic boost and the creation of 150,000 jobs, public support was tepid for a long time. Many said the country could ill afford the Games while thousands remained in temporary housing along a wide swathe of coastline devastated by the March 2011 tsunami. “If they don’t use this to revive those places that were hit so hard by the disaster, then it won’t mean anything,” said Kenta Matsubara, the manager of a bar in the Shinjuku entertainment district, where patrons shouted and clinked glasses as the announcement came in.

As recently as mid-2012, only 47 percent of people were in favour of hosting the Games. Support surged late on though, with one poll suggesting 92 percent were on board and looking forward to an economic boost and a chance to enhance Japan’s standing in the eyes of the world. The 1964 Olympics, which Tokyo hosted after beating rival bids from Detroit, Vienna and Brussels, are remembered with such pride that the anniversary of their Oct. 10 opening is a national holiday.

Long seen as a front-runner, Tokyo’s chances were clouded by a series of revelations about the Fukushima nuclear plant, whose operator has been forced to reverse denials and admit that hundreds of tonnes of radioactive water are pouring into the Pacific Ocean each day. Radiation levels have also spiked. Abe’s government said last week it would spend almost half a billion dollars to try to fix the water crisis. Critics said the government’s sudden embrace of the issue was aimed largely at winning the Olympic bid. “I think it’ll be good if choosing Tokyo leads to a clear resolution of the Fukushima problem,” Yumiko Okuda, 51. “The eyes of the world will be on Japan now so it will have to be dealt with thoroughly.”

The victory is likely to give Abe a popularity boost and could potentially spur his signature pro-growth policies for the world’s third-biggest economy, bringing real gains in terms of construction and tourism. Fukushima “is a problem but with this opportunity, a very strong political decision is needed,” said Kazuo Otsuki, 78, walking in a park under a light drizzle. “Mr. Abe will lead Japan, and I think there are many ways to overcome this problem.” The win may also push up the Nikkei stock average by more than 10 percent in the short term to around 15,600, near this year’s high, one analyst said. Stocks rose for a month after Japan was awarded the 1998 Nagano Winter Olympics. – DailyTimes

Zardari back into public