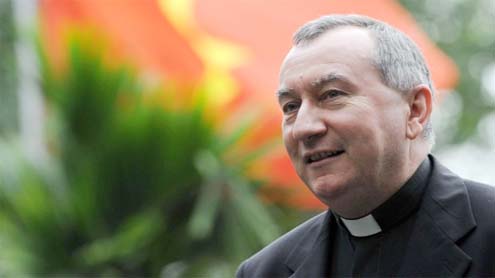 Until now, Parolin, a 58-year-old Italian, was the diplomatic representative of the Holy See in Venezuela. He has also worked in Nigeria and Mexico, as well as within the Vatican.The secretary of state assumes the role of the Vatican’s head of government and is considered the most important figure in the Vatican after the pope.

“I feel very strongly the grace of this call, which is yet another and the latest of God’s surprises in my life,” Parolin said in a statement quoted by Vatican Radio.”Above all, I feel the full weight of the responsibility placed upon me: this call entrusts to me a difficult and challenging mission, before which my powers are weak and my abilities poor.”

CNN’s Vatican correspondent John Allen, writing in the National Catholic Reporter, described Parolin as a “veteran Vatican diplomat,” who “has been on the front lines of shaping the Vatican’s response to virtually every geopolitical challenge of the past two decades.”Parolin has been on many people’s shortlists for the job since Francis became pope in March and signaled that he would shake things up, said Allen. The cleric has more than a quarter-century’s experience in the Vatican’s diplomatic service and is seen as one of the brightest of his generation.

“By naming a consummate insider, Francis appears to want to ‘reboot’ the Vatican’s operating system back to a point when it was perceived to operate efficiently, rather than scrapping it entirely,” said Allen.”The pick has been keenly anticipated, given that frustration with perceived breakdowns in governance under Bertone was part of what led the cardinals in March to elect a Latin American outsider to the papacy, handing him a clear reform mandate. Parolin now profiles as a key figure in that effort.”

Francis has already taken a number of steps to try to reform the Curia, the Vatican administration, since his election.In July, he set up an expert committee to recommend reforms to the economic and administrative structures of the Holy See. He’s also ordered more scrutiny of the Vatican bank, which has been plagued by financial scandals for years. – CNN