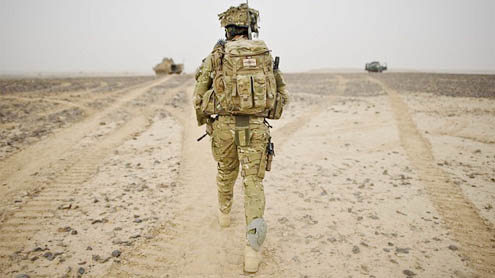 Why do we feel we must behave as a world power? Whenever a crisis blows up — Kosovo, Afghanistan, Iraq, Libya and now Syria — politicians of whichever party act as though it is our national destiny to intervene.

Much of the media, particularly the BBC, colludes in the fiction that what this country does during these crises is decisive. Britain is mentioned in the same breath as the U.S. Maps are produced signifying British fire-power on which there are almost as many Union Flags as Stars & Stripes.

Our leading politicians adore it all. Tony Blair was in seventh heaven when able to present himself almost as an equal of President George W. Bush before the Iraq War. His ecstatic reception in Congress a few months after the invasion  was the apotheosis of his dreams.David Cameron, though more measured, also relishes the role of international statesman. We are informed every time he has a phone conversation with President Obama. His spin doctors have revealed that over the weekend one call lasted an entire 40 minutes!

Meanwhile, we have created the grandiosely named National Security Council, after the American version. The difference is that while the U.S. President commands a huge, world-wide navy and other formidable military assets, we have a dwindling Royal Navy, RAF and Army.And dwindling even faster because of this Government’s defence cuts, which have left us without a proper aircraft carrier, the most basic entry-level possession for any aspiring world power. Yet Mr Cameron continues where Tony Blair, a much wilder fantasist, left off.Believe me, I wish we were still a great power. I am sure that when we were, we did more good than harm. But nations should be realistic about their limitations. All this  strutting and pretence is undignified.

Painful though it is for me to say it, what happens in today’s debate on Syria in the House of Commons is pretty much irrelevant to the outcome. Whether or not we join in, the U.S. will attack Syria.If we’re part of the mission, Royal Navy ships will fire one or two missiles to America’s hundred. If we’re not there, the U.S. navy will fire them  all.They’ve got more than enough. Strategically, we’re beside the point.This is hardly surprising given the fact that the U.S. spends a significantly higher proportion of its far greater economic resources on defence, so that its expenditure is more than ten times that of Britain.

It was the same story before the invasion of Iraq in March 2003. Weeks before that took place, President Bush told Mr Blair there would be no hard feelings if our army didn’t show up. It wasn’t really needed. But Mr Blair’s vanity was pricked. Our soldiers had to join in — and some of them had to die.

Britain was admittedly useful to America before the invasion in supplying political and diplomatic cover. It’s the same now. Our diplomats scurry about at the United Nations dreaming up resolutions that suit America while freeing it from the charge that it is acting alone. We are a handy bag carrier, not a world power.The fascinating question is how this has happened. After the mortifying debacle of Suez  in 1956, and when the last remnants of Empire had been handed back, Britain quickly settled down to its much diminished role. If anything, politicians may have exaggerated the extent of British decline.

Harold Wilson wisely resisted American attempts to involve us in the Vietnam War in the late Sixties. When Cyprus was invaded by Turkey in 1974, there was no question of Britain stepping in to restore order in its former colony.The transformative event was the re-taking of the Falklands in 1982 following Margaret Thatcher’s determination in the face of widespread Cabinet scepticism. This triumphant feat of arms persuaded many in our political class that Britain could still fulfil some sort of global role after all.

The Falklands War, though, was about national self- interest — defending British citizens. After Tony Blair arrived on the scene, we began to play the part of world policeman — always as America’s faithful understudy — in a series of conflicts in which our self-interest seemed not to figure very much, if at all. This re-assertion of British influence, however subordinated to the U.S., suited the top brass in our Armed Services, who usually relish a good scrap, as well as our mandarin class, who would much rather serve a gimcrack, make-believe global power than none at all.

Most of all, it has suited politicians of both parties, many  of whom are culturally and politically in awe of  the U.S. Tony Blair, as I’ve said, loved the adulation he received there.David Cameron was so anxious to bend the knee on his first visit to the U.S. as Prime Minister that he blurted out that Britain had been a ‘junior partner’ to America in 1940 — a year before the U.S. even entered the war.Mr Blair, of course, has made countless millions of dollars delivering speeches in the U.S. and working for American businesses. The truth is that a British prime minister who wants to make huge amounts of money on retirement can only do so by clinging limpet-like to the U.S. while in office.

I expect that in due course Mr Cameron will be invited to address Congress, where he will be received politely by American legislators, who will clap enthusiastically when he has finished.But isn’t there something gently patronising about the whole process? An Indian maharajah might have been similarly received by British politicians at the end of the 19th century. They knew where the power lay.Of course, I don’t for a moment suggest that any of these considerations will be in Mr Cameron’s mind when he  argues today in favour of some sort of assault on the Assad regime, which he blames, probably correctly, for  last week’s wicked chemical weapon attack on innocent civilians.

Maybe there is a moral case for retaliation, though I find it almost impossible to see how it can be put into practice without risking consequences that may be even worse than the original outrage.What I object to most in this charade is the pretence that our decision is crucial, and that our ships and aircraft are essential to the operation. We are bit part players. At the very most we offer America a sliver of solidarity.My arguement is not against the U.S., which is a great country and, for the most part, though not always, a force for good. We should be relieved that the most powerful nation in the world is our close ally.

But we shouldn’t be its slave. Just because President Obama  has decided — wrong-headedly, in my view — to fire missiles at Syria, we should not trot along obediently as the ever loyal poodle. And, no less important, we shouldn’t delude ourselves into thinking that such excursions are proof of our greatness. The rest of the world can see through our pretensions.We were a global power for 250 years, but that period is past. We are not able to police the world. Let’s concentrate on our national self-interest — and remember that Britain can be a great country without being a great power.