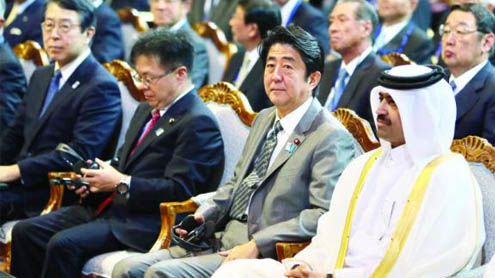 The two leaders agreed to strengthen cooperation in the political and security fields, they said in a joint statement.Abe’s tour of the Gulf is seen as his latest push to promote nuclear technology exports.And the Japanese government says Qatar and Kuwait have shown an interest in nuclear safety, out of concerns that neighboring countries plan to build nuclear plants.

In May, Japan signed a nuclear cooperation deal with another Gulf state, the United Arab Emirates, during a similar visit by Abe. A day later, he visited Turkey and signed a long-awaited deal to build a sprawling nuclear power plant on the country’s Black Sea coast, in a milestone for the Japanese nuclear industry.

Japan has touted its atomic expertise as an important export despite the 2011 catastrophe at the tsunami-hit Fukushima Daiichi nuclear power plant, where multiple meltdowns cast a pall of radiation over a swathe of the country’s northeast.Qatar and Japan also agreed to expand “bilateral cooperation on infrastructure development in Qatar,” said Wednesday’s statement.

The Gulf state is building its infrastructure from scratch after winning the right to host the 2022 football World Cup.On Tuesday, it signed a memorandum of understanding with South Korea for cooperation in the construction sector.Abe began his tour of Djibouti and the Gulf this week, taking him to Bahrain then Kuwait before he arrived in Doha on Wednesday where he took part in a business forum. – ArabNews