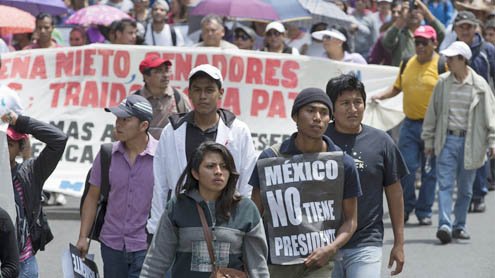 MEXICO CITY: This sprawling metropolis of honking cars and 22 million harried people has been brought to its knees, not by an earthquake or its ominous smoking volcanoes, but rather a small contingent of angry school teachers.

Some 10,000 educators protesting a government reform program have in the span of a week disrupted international air travel, forced the cancellation of two major soccer matches, rerouted the planned route of the marathon and jammed up already traffic-choked freeways.The disruptions have shown how little it takes to push a city that is snarled on a good day over the edge.

Taxi drivers are so desperate they are refusing fares to certain frequently blocked parts of the city, and residents have turned to urban survival skills — driving the wrong way down streets, using rental bikes, clambering over fences and piling into the back of police pickups to get to their destinations.

The city even been launched an app on Tuesday that warns drivers of protest locations, with a little orange icon of what appears to be a city resident climbing a mountain marking each blockade or march.”It’s terrible. There’s no business … people don’t even want to get into a cab, because the traffic isn’t going anywhere,” taxi driver Ernesto Gallegos said disconsolately Wednesday, standing beside his parked cab on the curb of the city’s main boulevard.

“People will get out and say, ‘I’ll walk instead.’ They’ll get on these eco-bikes,” he said, referring to the city’s bike-sharing program.Cesar Juarez, 30, who works repairing wireless systems for a telecom company, sat in his car at an intersection blocked by protesters, shooting photos with his cellphone to show his boss why he couldn’t reach a client. Others stuck in frozen traffic near the protests busily dialed in to postpone meetings.”I’ve had to cancel two appointments so far today,” fumed well-dressed bank employee Arturo Gutierrez, 47, rapidly texting away on his Blackberry. “That’s lost economic activity.”

“I just told my wife: ‘Let’s go live in the countryside. What are we doing here?'”The cause of this upheaval is a government reform program that would subject teachers to periodic evaluations in the form of standardized tests, and end the unions’ power over hiring. That would be a jolt to an education system in which some teachers can actually inherit their jobs from their parents.Juan Melchor Roman, one of the leaders of the striking teachers, said the union was aware of the growing anger among city residents.”But we think that is being whipped up by the news media,” he said. “We are asking the public to understand the teachers’ struggle … and understand us a little.”

The union says a standardized test is an unfair way to evaluate a teacher’s entire career, and argues that parents and student evaluations and other factors should be taken into account. The government counters that teachers will have multiple chances to pass the test, and says failing teachers won’t be fired, but re-assigned outside the classroom.

But those arguments were hardly the first thing on the minds of the suffering masses trying to make it through the day in Mexico City.City police have taken to routing traffic the wrong way down one-way streets — something the government euphemistically calls “reversing” streets. The country’s first-division soccer league announced it was cancelling two Mexico City matches because the police it would normally assign to keep the peace were too busy managing the protests.

And the situation looks like it may actually get worse.On Saturday, the striking teachers plan to join other protesters in a giant march against the government’s proposed oil industry overhaul, leading to fears that some demonstrators might resort to breaking windows and trashing stores, an unfortunate tradition in some past marches.Already, the teachers have managed to paralyze a city that sees itself as one of the cultural and intellectual capitals of Latin America, an embarrassment for the leftist government that runs Mexico City. And it’s not just disgruntled “chilangos,” as Mexico City residents call themselves, who are noticing.

Tourists and travelers were forced to take a torturous route to the Mexico City airport last week after teachers blocked the main expressway leading to the terminal, causing severe flight delays. Some travelers pulling suitcases were forced to walk down the expressway, scale a chain-link fence or climb into the back of police pick-up trucks that drove them around the blockade and into the terminal.Their problems haven’t ended as they seek to navigate the city.

Luis Torres, a tourist from Caracas, Venezuela, wandered across the city’s protest-blocked main boulevard Wednesday looking for the bright red double-decker tourist bus that normally stops on the corner.”You come to such a historic place, only to find that the tour bus has been re-routed and all your plans are delayed,” Torres said.In a comparison that few Mexico City officials would be pleased to hear, Torres compared Mexico City to his protest-clogged home country.”It’s not just the traffic, even the protesters’ slogans sound like the ones in Venezuela,” he quipped. – YahooNews

When to strike: Syria timing is complex for Obama

When to strike: Syria timing is complex for Obama