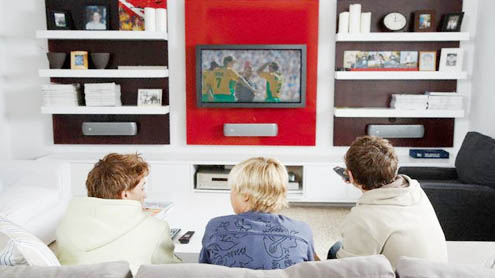 Children are becoming increasingly anxious due to too much time in front of TV and computer screens, according to a Government briefing paper.

Inactive lifestyles are also to blame for the negative impact on children’s wellbeing, said the document from Public Health England.It said higher levels of TV viewing are having a negative effect on children’s wellbeing, including lower self-worth, lower self-esteem and lower levels of self-reported happiness.Children who spend more time on computers, watching TV and playing video games also tend to experience higher levels of emotional distress, anxiety and depression, it said.

The briefing paper was released to back a Public Health England campaign urging parents to rethink their children’s eating and exercise habits ahead of the new school term.The Smart Restart campaign includes tips to reduce time in front of TV, encourage walking to school and for pupils to have a healthy lunch.Professor Kevin Fenton, Public Health England’s director of health and wellbeing, said: ‘There are many complex factors that affect a child’s wellbeing such as the wider environment they live in and their social, financial and family circumstances.But there are also some very simple things we can all do every day with our children to help improve their health and wellbeing.

‘Smart Restart provides families with the inspiration and tools to do this. Our goal is to encourage families across England to sign up to Change4Life to make a healthy change to their new term-time routines, which will hopefully then become part of their everyday lives.’Lil Caprani, director of communications, policy and campaigns at The Children’s Society, said: ‘When we asked children about their wellbeing as part of our Good Childhood Report, we found a strong association with being active and being happy. ‘Things like cycling, swimming or playing football all had a clear relationship, but simple things like just going for walks were associated with higher wellbeing.’ – DailyMail

Khamenei: Outsiders to blame for ME woes