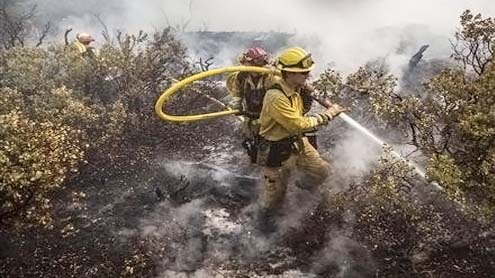 A colossal wildfire raging across the western edge of Yosemite National Park swept further into the park on Sunday and forced the evacuation of some its camps due to heavy smoke, according to a park spokesman.

The blaze on Sunday had come within 2 miles of a key reservoir that supplies most of San Francisco’s water.The so-called Rim Fire, which has burned 134,000 acres, caused the closure of the White Wolf area of the park on its western side, said Yosemite spokesman Tom Medema. Thirteen of 74 camps were occupied and evacuated, he said.The flames had consumed 15,000 acres within Yosemite, a park known for its waterfalls, giant sequoia groves and other scenic wonders, by Sunday afternoon, up from just over 12,000 acres in the morning, he said.

“There’s no eminent risk from the fire but the smoke impact is so heavy that we’re evacuating those areas,” Medema said.He did not know how many people were evacuated but said that one of the camps had 25 occupants.Officials said they have no plans to shut down the entire park or its top attractions. The fire was threatening power and water supplies to San Francisco, about 200 miles to the west. On Sunday, it moved to within 2 miles of the Hetch Hetchy Reservoir, which serves 85 percent of San Francisco with water, according to San Francisco Public Utilities Commission spokesman Tyrone Jue.

The fire had been 4 miles from the Hetch Hetchy Reservoir the day before.Jue said reservoir water remained clear on Sunday, despite threats of ash contamination.”There are strike teams and crews in place right now to assist with fire protection” near the reservoir, Jue said.The fire also passed through two power structures that help supply San Francisco’s public facilities with electricity. Utility crews planned to make repairs on Sunday, Jue said.The utility commission has been drawing on power reserves and purchasing electricity since Monday due to the downed power structures.

Jue said San Francisco power has not been disrupted. The fire had grown by 9,000 acres by Sunday morning. It has produced dangerous weather patterns by fueling thunderous pyrocumulus clouds that can alter the wind direction rapidly, potentially trapping firefighters, forest officials said. Smoke columns are rising more than 30,000 feet, said U.S. Forest Service spokesman Dick Fleishman.”That’s a real watch-out situation for our firefighters when they see that kind of activity, they know that the wind could actually move that fire right back on them,” Fleishman said. “That’s been happening every afternoon.”

Started on August 17 in the Stanislaus National Forest, the fire remained largely unchecked with extreme terrain and increased wind hampering efforts at containment, Medema said. Seven percent of the wildfire is now contained, he said.The fire is consuming brush, oaks and pines and has threatened some giant sequoias in the park, Medema said.Officials have closed parts of the park’s northwestern edge throughout the week, including the Hetch Hetchy Reservoir area, Lake Eleanor, Lake Cherry and the Tuolumne and Merced giant sequoia groves.The fire was still 20 miles from Yosemite Valley, the park’s main tourist center, Medema said Sunday morning. More than 2,800 firefighters were on the front lines on Sunday.

California Governor Jerry Brown on Friday declared a state of emergency for San Francisco, saying the fire had damaged the electrical infrastructure serving the city and forced the Public Utilities Commission to shut down power lines.The Hetch Hetchy Reservoir provides water to 2.6 million customers in the San Francisco area and Brown in his declaration said the city’s water supply could be affected if the fire harms the reservoir, most likely by contaminating its water with ash. San Francisco could draw on water from neighbors if the supply is compromised, Jue said.

Yosemite, one of the nation’s major tourist destinations, attracted nearly 4 million visitors last year. The park has been posting updates and alerts on its website. (http://www.nps.gov/yose/index.htm).The blaze in the western Sierra Nevada Mountains is now the fastest-moving of 50 large wildfires raging across the drought-parched U.S. West. The blazes have strained resources and prompted fire managers to open talks with Pentagon commanders and Canadian officials about possible reinforcements.

A 111,000-acre (44,920-hctare) fire near the resort town of Sun Valley in central Idaho was 82 percent contained on Sunday as the number of firefighters assigned to the blaze was reduced to several hundred from a high of 1,800, officials said.At its height a week ago, the blaze forced the evacuation of 2,250 homes in upscale developments in a scenic river valley known for a world-class ski resort and for premier hiking and biking trails that wind through the Sawtooth Mountains.The Rim Fire had destroyed 11 homes, 1,000 outbuildings and four commercial properties by Sunday.

Evacuation advisories were lifted for roughly 2,500 residences in two Tuolumne County communities in California on Saturday, but at least 2,000 households were under evacuation advisories, Fleishman said.The 2013 fire season has already drained U.S. Forest Service fire suppression and emergency funds, causing the agency to redirect $600 million meant for other projects like campground and trail maintenance and thinning of trees to reduce wildfire risks, agency spokesman Mike Ferris has said. – YahooNews